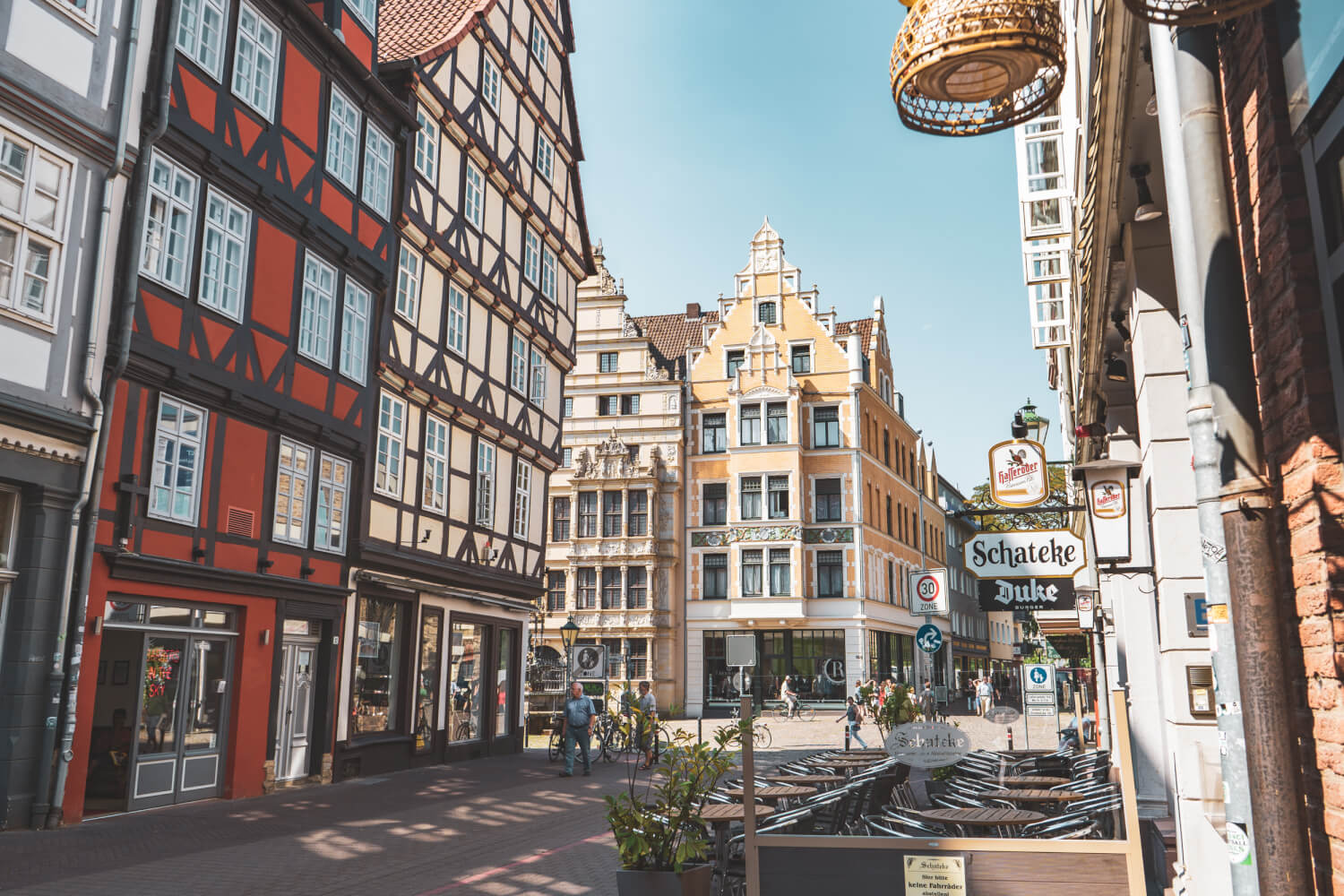 As the only German state which contains both mountainous and coastal areas, Lower Saxony is a great place to visit for exploring varied attractions!

Lower Saxony borders both the Netherlands and the North Sea, while also surrounding the state enclave of the Free Hanseatic City of Bremen. It’s known for its stunning natural delights as well as many pretty medieval towns.

In this list of beautiful places to visit in Lower Saxony, we’ll be sharing some of our favorite destinations in the German state of Lower Saxony, including the most magical castles and unique natural sights.

We hope you enjoy our recommendations, and be sure to let us know in the comments if there are any Lower Saxony must-sees you would add to our list!

Lüneberg is one of the best places to visit in Lower Saxony if you want to escape the bustle of big cities like Hanover in favour of a more romantic village-like getaway.

Back in the day, the production of salt led Lüneberg to become a wealthy member town of the Hanseatic League, and since it was relatively unscathed during WWII, many beautiful historic buildings remain.

The medieval old town contains numerous red Brick Gothic–style buildings including the church of St. Johanniskirche, and there are also some enchanting parts of town where you’ll find red-brick buildings lining the banks of the Ilmenau River, most notably around Alter Kran im Lüneburger Hafen, an old salt-works crane.

Here, you’ll also find old Hanseatic wooden boats in the river, as well as lovely pubs and cafés next to the water.

And if you’re keen to venture a little farther, just outside the city centre is the German Salt Museum, perfect for those who want to learn more about Lüneberg’s 1,000-year history of salt mining.

One of the most beautiful places in Lower Saxony is the huge area of heathland known as Lüneburg Heath, which blankets the land in purple during the blooming season between August and September.

As you might have guessed, Lüneburg Heath surrounds the town of Lüneburg with a landscape of moorlands, tranquil meadows and heathland. Visitors flock to the many hiking and cycling trails in summer when the heath is in bloom, but there’s plenty to do here during the rest of the year as well.

The bogs and moors within Lüneburg Heath often look quite eerie, particularly when there’s fog or mist. For the best views, head to the top of Der Wilseder Berg, which is in the very centre of the Lüneburg Heath nature reserve. With 169-metre (554.4-foot) elevation you can see all the way to Lüneburg or Hamburg on a clear day.

Located on the northwestern slopes of the Harz mountains, Goslar is a gorgeous and historic German town that’s home to two separate UNESCO World Heritage Sites.

Goslar’s Old Town is one of the UNESCO sites since it’s one of the best-preserved city centres in the world. The romantic cobbled alleys are lined with centuries-old half-timbered houses leading up to the restored Imperial Palace, one of the most famous sights in the entire Harz Mountains.

The Zwinger Tower is an ancient fortification which now houses a museum, restaurant and guesthouse. In the main market square, there is also a famous glockenspiel clock, where little figures come out and perform along with music at 9am, midday, 3pm and 6pm.

A bit further out of town is the second UNESCO World Heritage Site, the Rammelsburg Mine and Museum which was originally open for more than 1,000 years, making it one of the largest continuously-mined ore deposits in the world! It’s also open every day except Christmas Eve and New Year’s Eve, but check the website for specific hours and tickets.

Some of the most stunning natural things to see in Lower Saxony are located within the Harz National Park, which spans a range of forests that also extends into the state of Saxony-Anhalt.

This national park encompasses mountains, forests, valleys, ski resorts and picturesque towns, all of which offer things to do in any season. The Harz Railway line runs north to south across the national park, including going up to the main tourist attraction of Brocken, the highest mountain in the park.

The steam train itself is very picturesque (looking a bit like the Hogwarts Express!) and also allows visitors to explore the many pretty towns within the Harz National Park. Along with Goslar, quaint historic towns like Quedlinberg, Blankenburg and Duderstadt are definitely worth exploring, perhaps in between the many energetic activities on offer in the region!

The city of Hanover (also written as Hannover) is probably one of the most well-known places to visit in Lower Saxony, as it’s both the capital and largest city in the state, offering some incredible architecture, parks and museums to explore.

The Royal Gardens of Herrenhausen are perhaps the most famous Hanover attraction (more on that in a minute) although both the New Town Hall (pictured below) and Lower Saxony State Museum also look like palaces from the outside!

A visit inside the New Town Hall also provides a parabolic lift ride (at a 17-degree angle) to the 93.5-meter-high (307 feet) observation deck for magnificent views over the city. Then there are four scale models of the city to have a look at inside the hall too.

Hanover’s Old Town is also a lovely spot for a wander amongst the Marktkirche and Old Town Hall, which is just as striking, in a different way, as the New Town Hall. If you want to escape buildings in favour of nature, head to the artificial lake of Maschsee or the Tiergarten forest.

Best of all, despite its status as capital, Hanover isn’t too overcrowded with tourists, so it makes for a perfect travel destination if you’re looking to go a bit more off the beaten path.

One of the most visited Lower Saxony attractions is the Herrenhausen Gardens of Herrenhausen Palace, which are located just outside the main centre of Hanover.

There are four gardens surrounding the reconstructed, and rather small, Herrenhausen Palace, which was once the royal summer residence of the House of Hanover. Visitors can also enter the palace but it’s the stunning gardens that are the real drawcard here!

The Great Garden is one of the most beautiful Baroque-style gardens in Europe, plus it is used for regular events, festivals, firework competitions, concerts and even theatrical performances. The Berggarten was once a vegetable garden that was transformed into a botanical garden for exotic plants, and today contains one of the largest collections of orchids worldwide.

Inside the Welfengarten is the Welfenschloss palace, which now houses the University of Hanover while the Georgengarten contains the Leibniz Temple as well as The Wilhelm Busch German Museum for Caricature and Critical Graphic Arts – now there’s a mouthful!

PRACTICAL INFORMATION FOR VISITING: It’s free to visit the Georgengarten and Welfengarten. You can save a bit of money by getting a combined ticket for the Great Garden, Berggarten and Palace, or buy separate tickets if you prefer. Do check the opening times online as they vary throughout the year and when there are special events on.

Braunschweig, also called Brunswick in English, is another German city in Lower Saxony that was part of the Hanseatic League and was once an important centre of commerce in Medieval Germany.

While the city took heavy damage during WWII, many of the historic buildings were meticulously restored, so it still has a charming Old Town market square . The Burgplatz (Castle Square) is another must-see spot with buildings of cultural and historical significance, particularly the 19th-century reconstructed Dankwarderode Castle.

This square is also watched over by the 12th-century Brunswick Cathedral, the Neo-Gothic Town Hall and a statue of a lion called the Brunswick Lion which is today the symbol of Braunschweig. The statue in Braunschweig is actually a copy of the original bronze cast from 1166 which can now be seen in the museum of Dankwarderode Castle.

Heide Park Resort is one of the most popular Lower Saxony tourist attractions, especially with children and young adults who come to experience everything this theme park has to offer!

With more than 40 rides across many differently themed ‘worlds’, Heide Park is the largest amusement park in the north of Germany. The different zones include Lower Saxony, Pirate Bay, Transylvania (including a castle!), Land of the Forgotten, and Wild Wild West. Many of the rides are more for families with small children but there are also a number of rollercoasters that thrill-seekers love.

Colossus was the steepest wooden roller coaster in the world (until 2003) and Heide Park’s Scream is still the world’s tallest drop tower. While the park and resort are fun at any time of year, there are also exciting events you may want to time your visit to see, like Carnival, Pride, Oktoberfest or Halloween.

Celle Castle is one of the former, and most beautiful, castles of the Royal House of Hanover, located just under an hour from Hannover.

While it may not seem as spectacular from the outside as some other German castles, Celle Castle is well-known for having some pretty incredible interiors, including Baroque staterooms with opulent stuccoed ceilings by Italian masters. The castle theatre is also the oldest Baroque theatre in Europe still in use today.

The beautiful castle chapel is also worth seeing, with renaissance architecture and paintings on display for visitors to admire. Celle Castle is additionally notable in that even today it stands on an island with moats surrounding it and the castle park surrounding that. The park is free to explore but you will need to join a guided tour to see the castle interiors.

Marienburg Palace is easily one of the most magical Lower Saxony places to visit, especially since it really looks like a fairytale palace rising up from an enchanted forest.

King George V of Hanover had Marienburg Castle built as a gift to his wife, Queen Marie. It was built between 1858 and 1867 in the impressive Gothic Revival style after she had expressed a wish for a romantic summer residence. If nothing else, Marienburg Castle is certainly romantic, whether you see it from afar or head inside for a guided tour.

The castle interiors have been almost entirely preserved as they were so guests can join guided tours to see the rooms filled with antique furniture, art and cultural rarities of the Hanoverian royal family. In summer visitors can also climb the main tower if the weather allows for an extra €5 fee.

Café Maries in the former horse stables is a unique spot for some refreshment, with the original stone horse troughs and hay racks still on display.

One of the more unusual places to see in Lower Saxony (which you might never have thought of) is the chain of islands off the coast called the East Frisian Islands.

There are seven inhabited islands making up the chain, all of which draw locals and tourists alike who are looking for an idyllic seaside getaway. All the islands can only be reached by ferry and all but two (Borkum and Norderney) don’t allow cars. Juist is the best island for a truly relaxing stay as it’s peppered with wellness and spa facilities.

Between the mainland of Germany and the islands, there are extensive mudflats making up the Lower Saxon Wadden Sea National Park which is also a UNESCO World Heritage Site due to its unique ecosystem and biodiversity. If you’ve ever wanted to experience walking across mudflats while spotting seals and birds, this is where to do it!

Did we miss any of your favorite places to visit in Lower Saxony?