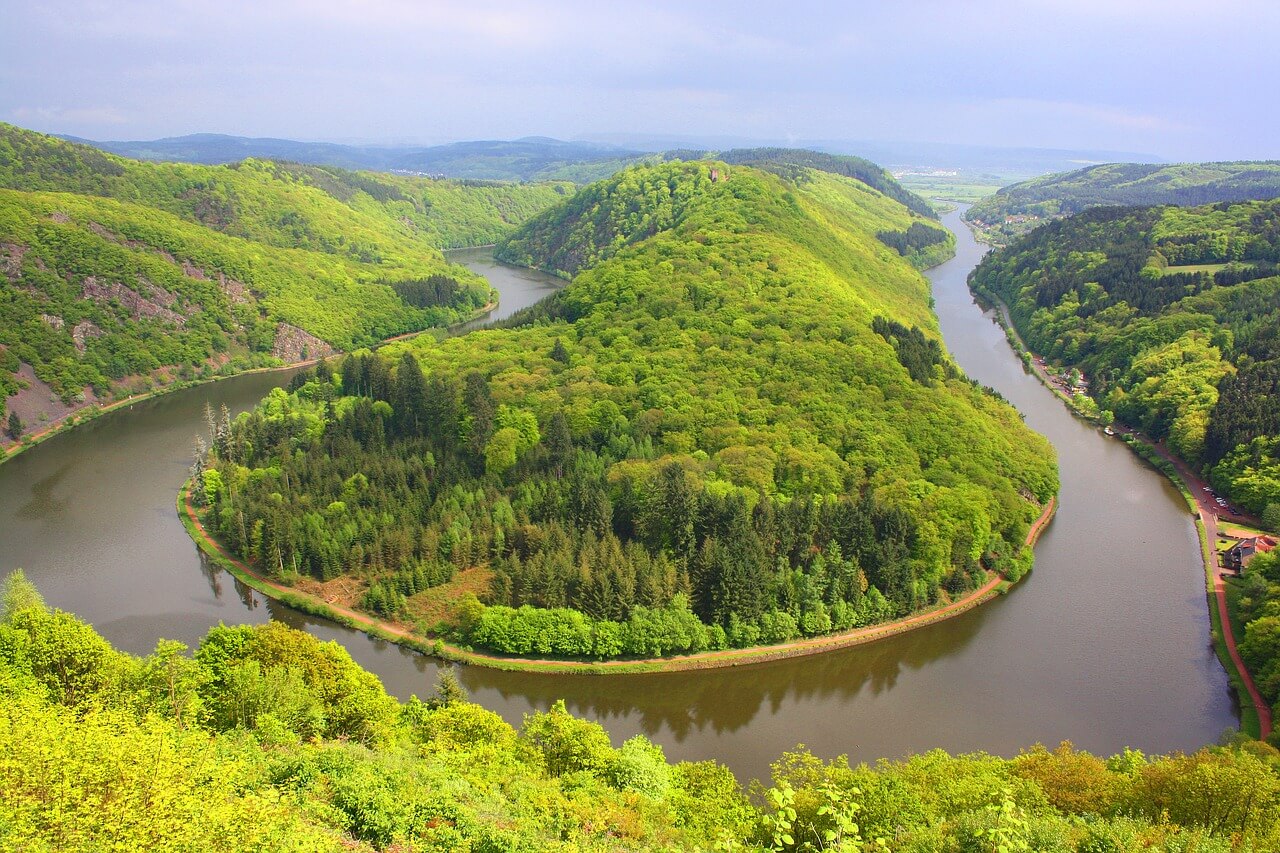 Saarland is well known as an area with lots of gorgeous forests ideal for hiking, but it also contains a number of interesting man-made attractions and unique cultural aspects.

In this list of beautiful places to visit in Saarland, we’ll be sharing some of our favorite destinations in this underrated German state, including UNESCO World Heritage Sites, beautiful castles and unusual structures.

We hope you enjoy our recommendations, and be sure to let us know in the comments if there are any Saarland must-sees you would add to our list!

Since it contains many lush forests, it’s not surprising that one of the most beautiful places in Saarland is a treetop walk for visitors to really enjoy the natural views.

Saarschleife is a spot in the River Saar, also known as the Great Bend in the Saar, where the river curves around a wooded area as seen in the photo below.

This photo is taken from the Treetop Walk Saarschleife, which was installed opposite the dramatic river bend so that visitors have an incredible view of one of the most visited Saarland tourist attractions.

The walk runs for 1.2 kilometres (0.78 miles) and there’s also an observation deck which rises 23 metres (75 feet) into the sky. Visitors can see beech, oak and douglas fir trees as they wander amongst learning and activity stations, plus the walk is accessible for both prams and wheelchairs!

PRACTICAL INFORMATION FOR VISITING: The Treetop Walk costs €11.50 for adults and has different opening times throughout the year so make sure you check the website.

Located right by the French border, Saarbrücken’s old town is centred around the Sankt Johanner Markt (Market of St. Johann) which is about a block away from the Saar River. This traditional market square is particularly pretty at Christmas when stalls pop up selling festive food and drink along with gifts.

Other notable historic sights in Saarbrücken include the Baroque Ludwigskirche (Ludwig’s Church, pictured below), a stone bridge across the River Saar dating from 1546 and the 18th-century Saarbrücken Castle. The city is also home to many fascinating museums, art galleries and excellent restaurants.

One of the best places to see in Saarland is the Teufelsburg Felsberg, a castle ruin that’s impressive by itself, and also boasts epic views over the surrounding countryside.

The castle’s historic name is Neu-Felsberg and it was built between 1354 – 1360. The name Teufelsburg (Devil’s Castle) comes from a local legend of a knight who sold his soul to the devil before a duel. Apparently, his screams as he entered Hell can still sometimes be heard today!

Creepy stories aside, the views from Teufelsburg Felsberg across Saarlouis and the Saartal are well worth the time it takes to visit. There used to be a small museum on-site and occasional events, but there have been legal difficulties in the last few years so that remains a bit up in the air. However, it’s still possible to see the exterior of the ruins and there’s even a hiking trail that circles them.

About 30 kilometres east of Saarbrücken is another beautiful ruin to explore, although this one is a former Cistercian abbey built on the mountain of Marienberg.

Wörschweiler Abbey was founded in 1131 by Earl Friedrich of Saarwerden and his wife Gertrud. Today there only remains the ruins of the three-aisled basilica and the auditorium of the abbey, although the excavated foundation walls show the floorplan of the original building.

The abbey ruins are managed by a foundation and open to the public, making it a lovely spot for a quiet wander while also enjoying the views down over the nearby towns.

You will need to hike a bit to reach the ruins, as there’s no driving road all the way, but it’s fairly well signposted and you can check here for detailed directions (in German but you can click to translate).

One of the more unusual things to see in Saarland is the Saar Polygon, a monument constructed to commemorate the state’s coal mining industry.

Coal mining was an important part of Saarland’s economy and industry for centuries, finally ending in 2012. The last coal mine to be closed was Bergwerk Saar, which is where the Saar Polygon was constructed. The monument is designed to show the region’s cultural heritage of mining, while also looking toward the future.

The walk-in polygon stands on the old spoil tip of the Bergwerk Saar coal mine, which is 150 metres high. The monument is a further 30 metres high with viewing platforms where views all the way to France and Luxembourg can be enjoyed!

One of the coolest things about the Saar Polygon is that it appears to be a different shape, based on where you view it from; depending on the direction you might see a rectangular arch, a triangle, an inverted triangle or an hourglass.

The Völklingen Ironworks are a UNESCO World Heritage Site and one of the most-visited Saarland attractions.

Located in the town of Völklingen, this site was a blast-furnace complex which produced pig iron between the years 1882 to 1986. While the ironworks closed down in 1986 due to the economic steel crisis, the site was recognised by UNESCO since it’s the world’s only completely preserved ironworks from the heyday of industrialization.

The Völklingen Ironworks was the first industrial monument from the period to be added to the World Heritage List and is also one of the anchor points of the European Route of Industrial Heritage.

Today the site is a mix of museum and exhibition space, with an interactive science centre about the making of iron as well as regular art displays, installations and events. There’s even a bistro and beer garden on-site!

PRACTICAL INFORMATION FOR VISITING: The Völklingen Ironworks site is open 362 days a year from 10am – 7pm in summer and until 6pm in winter, only closing on December 24th, 25th and 31st. It costs €17 and is free on Tuesday afternoons from 4pm. Check out the official website for more info.

If you are interested in nature then the Bliesgau Biosphere Reserve is definitely one of the best places to visit in Saarland.

Located on the border with France, this protected nature reserve is also a UNESCO-listed Biosphere Reserve since it is filled with orchids, orchards and protected beech forests. It’s often called “Germany’s Land of the Orchid” as almost half of all orchid species growing in the country can be found here in early summer.

Along with beautiful flowers, the region is a sanctuary for many rare animals such as the little owl, beavers, marsh fritillary butterflies and red kites. There are Roman and Celtic settlements to explore, as well as a Roman museum in Schwarzenacker and an archaeological park in Bliesbruck-Reinheim.

For something a little different, the Schlossberg Caves in Homburg are the most extensive networks of manmade red sandstone caves in Europe, where you can explore 12 stories underground of mesmerising red and yellow sandstone.

If you visit the Treetop Walk Saarschleife which we mentioned earlier, you’ll be able to look across the Saar River to a forested area, in which nestles the ruins of Burg Montclair.

These ruins were once part of a medieval castle that was extremely important for controlling the River Saar. It was one of the largest castles in Germany during the High Middle Ages, before being destroyed in 1351. A new building was constructed on the site which also fell into ruins, and what now remains are these ruins which date back to 1439.

Even though Burg Montclair is a ruin, it has been well preserved so that visitors can explore the site today, with its impressive towers and beautiful panoramic views. There’s also an on-site bistro and beer garden which is a popular stop-off point for hikers.

PRACTICAL INFORMATION FOR VISITING: Admission to the towers and small museum only costs €2. The castle is open from April to October between Tuesday and Thursday, closed on Mondays. Check the website for the opening times for the different sections.

Villa Borg is a reconstructed Roman Villa in Saarland that offers visitors a fascinating glimpse into the lives of ancient Romans in Germany from 2,000 years ago.

If you want to travel back in time then you should definitely head to this open-air museum where a variety of Roman buildings have been unearthed and reconstructed. The main attraction is the central mansion, but the complex also holds additional residential buildings, bathhouses, workshops, taverns and courtyards to explore.

Not only the buildings but even the gardens were recreated as they would have been, using pollen analysis and literature. Additionally, visitors can have a traditional Roman meal in the tavern, with many of the menu items coming out of the on-site garden.

PRACTICAL INFORMATION FOR VISITING: Villa Borg is open Tuesday to Sundays from 10am to 6pm between April to October and from 11am until 4pm in February, March and November. It’s closed in December and January. Entry costs €6 for adults.

If you’re looking for Saarland places to visit where you can partake in water-based activities then you shouldn’t miss the man-made reservoir known as the Bostalsee.

This dam was constructed in 1979 purely to provide recreational activities, boost tourism and improve the local ecology. It’s a very popular spot for both local holidaymakers and tourists, with plenty of fun things to do. The deep blue lake backed by rolling green hills makes for an idyllic area to swim, cycle, kayak, sail or even hire paddleboats.

A variety of camping sites, accommodations and places to eat or drink surround the Bostalsee, plus there’s both a waterpark (Aqua Mundo Park Bostalsee) and an amusement park (Bosiland) for families to enjoy. Best of all, the area is stunning no matter the season.

For visitors to Germany who love wolves, the Wolfspark Werner Freund in Merzig is one of the most unique places to visit in Saarland!

This nature park was established by the animal behaviourist Werner Freund, who lived among the wolves for 30 years studying their natural wild behaviours. While the wolves here are in enclosures, they are very large, allowing the wolf packs to live life as normally as possible.

Entrance to the park is free, although donations are always welcome, for visitors to see Arctic Wolves, Timber Wolves, and wolves from Sweden or Mongolia. There’s no guarantee that the wolves will come close but there are a number of trails in the park as well as some spots where visitors can get up higher to see where the wolves might be.

If you’re very lucky, you might even get to hear all the wolves howling together!

Did we miss any of your favorite places to visit in Saarland?