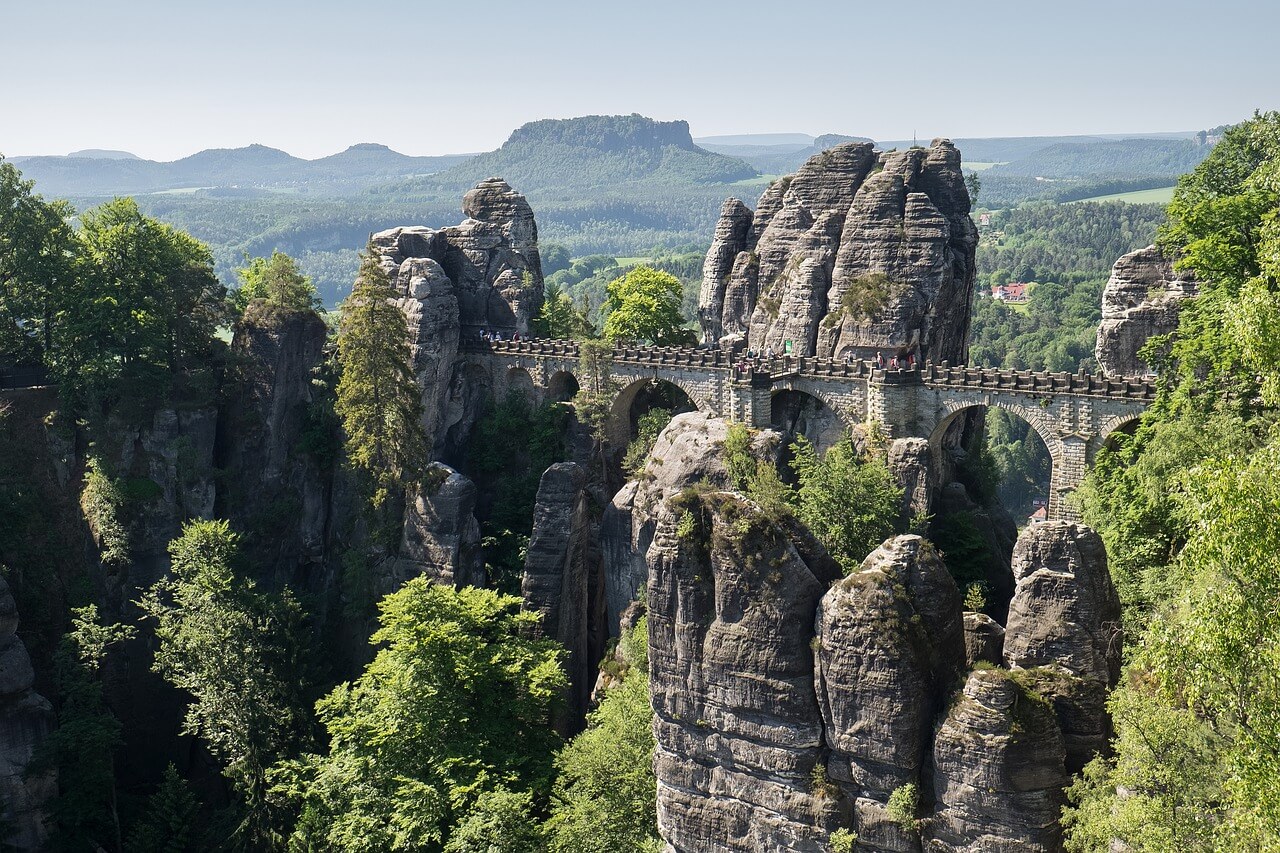 As one of the most historic regions in Germany, the state of Saxony offers visitors much in the way of beautiful castles, notable buildings, and natural wonders.

The cities of Dresden and Leipzig are famous for being centres of politics and trading, respectively, while there are also many stunning landscapes outside of the main cities.

In this list of beautiful places to visit in Saxony, we’ll be sharing some of our favorite destinations in the German state of Saxony, including the most gorgeous castles and prettiest towns.

We hope you enjoy our recommendations, and be sure to let us know in the comments if there are any Saxony must-sees you would add to our list!

Often called the most beautiful national park in Germany, the Saxon Switzerland National Park is known for its mythical, finger-like rock formations and the famous Bastei Bridge (pictured below) which is free to walk across.

The park is also filled with stunning valleys and waterfalls, so it’s very popular with hikers as well as photographers!

If you don’t feel like hiking, it’s also possible (and very charming) to explore the park via nostalgic paddle steamers, steam boats and diesel boats or to ride the Kirnitzsch Valley tram. Aside from the spectacular natural scenery, a visit to the imposing Königstein Fortress Festung is a must.

The city of Dresden is perhaps one of the most important places to visit in Saxony, as it is the state capital and contains plenty of historic significance.

Often called the “Florence of the North”, Dresden contains many splendid Baroque buildings, beautiful churches and romantic views of the Elbe River.

The most visited locations in Dresden include the palatial complex with gardens known as Zwinger, the beautiful Semperoper opera house and the stunning Dresden Castle, which houses a number of museums.

The Dresden Frauenkirche (Church of Our Lady, pictured below) is perhaps the most famous landmark in the city. Constructed in the 18th century it was destroyed in WWII and left as a war memorial, before being reconstructed between 1994 and 2005.

Dresden’s yearly Striezelmarkt is also considered to be the first proper Christmas market in the world, first held in 1434. Today it continues to transform the main square during the festive season and, as one of the largest Christmas markets in the whole of Germany, attracts around 3 million visitors from around the world!

While Dresden is the state capital, Leipzig is the largest city and one of the best places to visit in Saxony as it is filled with culture and history to explore.

Often called the “New Berlin”, Leipzig has become a hip and happening place in recent years, filled with museums, art galleries, nightclubs, startups and plenty of cool street art. Leipzig University also attracts many young students to the population, along with the many artists and musicians who call the city home.

In terms of attractions, Leipzig Zoo is one of the best and most modern zoos in Europe, and the best in Germany, with breeding programs for endangered species and also the second-largest indoor rainforest in the world.

Other must-sees in Leipzig include the Monument to the Battle of the Nations (which is an impressive sight with stunning views of the city), the Opera House and St Thomas Church – where Johann Sebastian Bach was buried after serving as choirmaster for 27 years.

One of the prettiest places to see in Saxony is the charming medieval town of Görlitz, although it’s often overlooked in favour of its flashier neighbour Dresden.

Located in Germany’s extreme east, right on the border with Poland, the Polish town of Zgorzelec can be seen across the River Niesse and was once part of Görlitz. Even today, buses cross the two bridges between the towns and residents get on well.

Görlitz is packed with medieval buildings that escaped the destruction of WWII, leading it to often be used as a filming location, standing in for places such as New York, Berlin, Paris and Heidelberg. Parts of The Reader, The Book Thief, Inglourious Basterds and The Grand Budapest Hotel were all filmed in Görlitz, which has even come to be called Görliwood!

If you’re not looking for filming locations, make sure to head to the Reichenbach tower for views over the city, the Schönhof (the oldest civic Renaissance structure in the country) and the beautiful St. Peter and Paul Church.

One of the most interesting things to see in Saxony is the circular Rakotzbrücke (Devil’s Bridge) located within the beautiful landscaped Kromlau Park in Gablenz.

Kromlau Park is an English landscape garden known for stunning blooms of azaleas and rhododendrons in spring. Along with the gardens, there are a number of small ponds and lakes, the most famous of which features a semi-circular bridge made from basalt.

When the water is still, the bridge and its reflection create a perfect circle, which makes for pretty stunning photographs, especially since the columns on either side make it look almost mythical! It’s one of many circular bridges in Europe which were named “Devil’s Bridges” because locals believed only the Devil could have made them.

It’s free to visit Kromlau Park and get a photo of the Rakotzbrücke – if you dare! – but the bridge is closed to pedestrians due to safety concerns and in order to preserve the bridge.

If you’re at all interested in porcelain, then the city of Meissen should definitely be on your list of must-see Saxony attractions!

The city of Meissen is most famous for being the first place in Europe to manufacture porcelain, which had previously been a luxury good imported from China. There are deposits of both china clay and potter’s clay in the region, which is what helped the beginnings of Meissen porcelain which is today world-famous.

A trip to Meissen wouldn’t be complete without visiting the 300-year-old Meissen porcelain factory museum. The rest of the city is also beautiful, especially the 13th-century Gothic cathedral and the Albrechtsburg castle (pictured below with the cathedral behind) when seen from the Elbe River.

If you head to the hill to visit the cathedral and castle museum, you will also be rewarded with stunning views over the Old Town of Meissen.

Moritzburg Castle is a stunning Baroque palace that absolutely deserves its title as one of the most popular Saxony tourist attractions.

Located about half an hour north of Dresden, Schloss Moritzburg is a very symmetrical and pleasing castle to see. It’s built on the middle of an artificial island and boasts four round towers surrounded by lakes and woodland. There’s also a romantic French-style formal garden leading to the castle, although it was never fully completed.

The castle was originally built as a hunting lodge for Duke Moritz of Saxony, with later extensions adding on examples of Baroque architecture. The castle interior allows visitors to marvel at the opulent furnishings from the time of Augustus the Strong, who was King of Poland.

Notable displays include a huge collection of deer antlers (including the heaviest red deer antler in the world) and Augustus the Strong’s four-poster bed which is decorated with around a million peacock, pheasant, guinea hen and duck feathers!

PRACTICAL INFORMATION FOR VISITING: Moritzburg Castle costs €10 for adults and is open seven days a week with slight differences in closing time depending on the season so make sure you check the website. It also seems to be closed for most of November but is otherwise open during winter.

Burg Kriebstein is another stunning castle in Saxony, although this one is classified as a spur castle since it was built on a rocky spur rising up above the River Zschopau.

The first recorded mention of Kriebstein Castle was in 1384, with sections of the structure displaying medieval and gothic architecture. Obviously, it’s very impressive to see from outside, particularly from across the river, but the interiors are also a delight to explore.

Once inside, visitors can climb the highest tower and descend into the deepest cellar while marvelling at the castle chapel which contains valuable paintings from around 1410. There’s a museum and a restaurant within the castle, although packing some wine and a picnic to enjoy in the castle park is just as magical!

PRACTICAL INFORMATION FOR VISITING: Entrance to Kriebstein Castle costs €6 and it’s open Tuesday to Sunday from 10am until 5pm (closing at 6pm on weekends). Check the website before you go for the rare days the castle is closed.

After Dresden and Leipzig, the city of Chemnitz is the third-largest in Saxony, plus it’s a close spot to base yourself for visiting the Ore Mountains (more on them in a minute).

But don’t be fooled into thinking that Chemnitz is just a place to stay while exploring nearby, as the city has plenty to discover, especially since it’s been designated as one (of two) of the European Capitals of Culture for 2025! A visit to the Industriemuseum Chemnitz is the best first stop in order to learn more about the city’s history as a textile and manufacturing hub.

Chemnitz contains some beautiful landmarks, such as the iconic red tower that was part of the city’s original walls (and is the oldest construction in the city), the old university, the opera house and the 15th-century old town hall. Inside the Kulturkaufhaus Tietz (cultural centre) are specimens of petrified wood from the Chemnitz petrified forest, which dates back millions of years!

The city is also home to many fine art museums, as well as the smallest castle in Saxony, Rabenstein Castle. The St Petri Church (pictured below) is a gorgeous neo-Gothic construction made of sandstone and brick.

The Ore Mountain Range is one of the most spectacular Saxony places to visit, particularly in winter when the area becomes especially magical.

Stretching 160 kilometres (100 miles) along the German-Czech border, the Ore Mountains were, not surprisingly given the name, very important to the mining industry in the region, with rich deposits of gold, silver, lead, copper, tungsten and pitchblende. Today much of the mountains are protected natural reserves, as well as a UNESCO World Heritage Site.

Erzgebirge (as it’s known in Germany) is also called “the cradle of Christmas” as it holds many festivals and traditional rituals during the winter months. If you want to experience a bit of the magic but can’t visit during winter, head to the Leavenworth Nutcracker Museum in Neuhausen!

Otherwise, this region is ideal for hiking and mountain biking in summer, with options for skiing, snowboarding, bob-sleighing and even snow kiting in winter.

The area near Leipzig known as Neuseenland in German is one of the most fascinating and fun places to visit in Saxony, as it’s a series of old open-cast mines which are being transformed into a lovely Lake District!

After the mining industry closed down, the Leipzig authorities decided to flood the many leftover open-cast mines in order to create lakes, which are now popular places for water sports, sunbathing and hiking through forests. This “New Lakeland” is still under construction, with the work planned to be finished by 2060.

Since the lakes are close to Leipzig they make excellent places for a relaxing getaway from the city, either for a day or longer. Cafés, restaurants, hotels and other accommodations line the shores, with many marinas and beaches for holidaymakers to enjoy. If you’re craving a beach break near Leipzig, don’t miss out on this man-made Lake District.

Did we miss any of your favorite places to visit in Saxony?