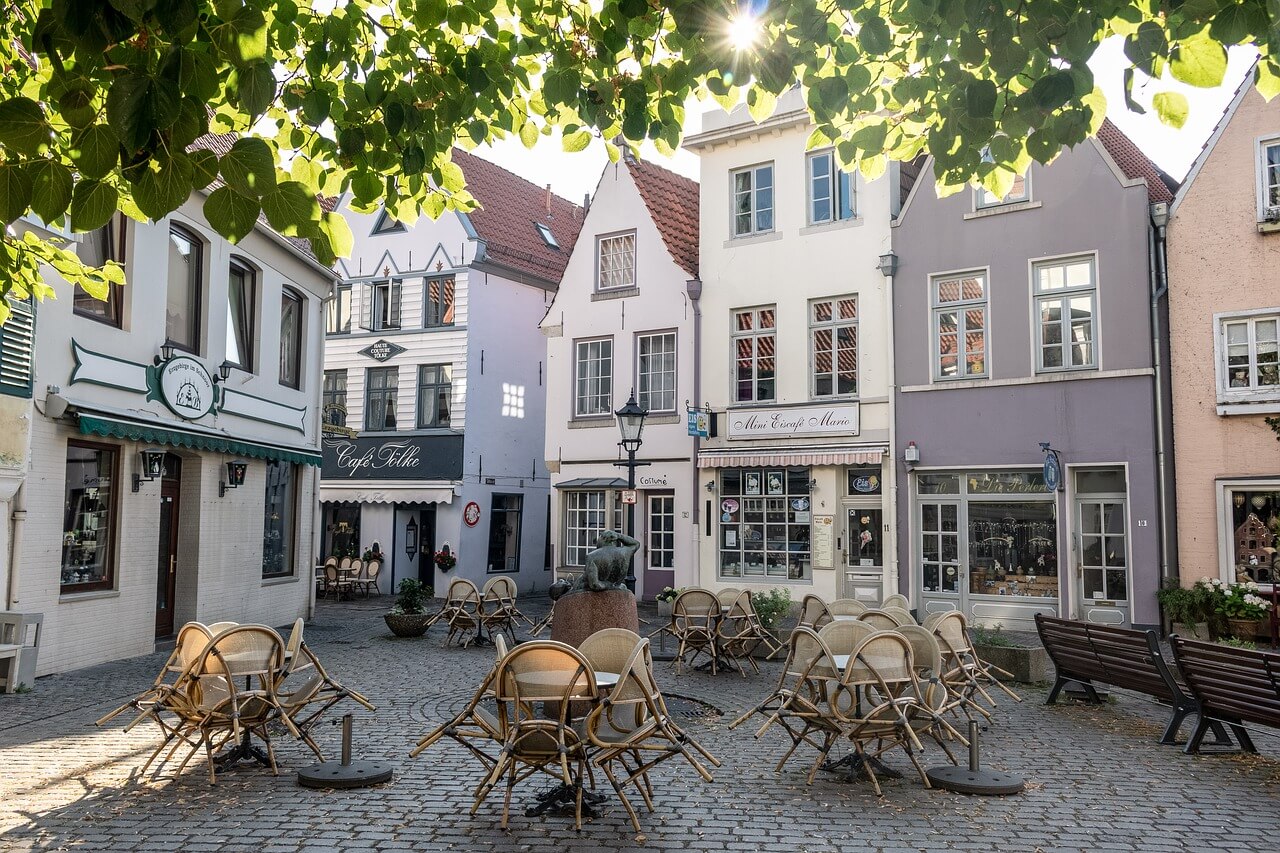 Possibly most famous for a fairytale by the Brothers Grimm, Bremen is a two-city state in Germany with much more to discover than some weird barnyard animals!

The Town Musicians of Bremen is a German fairytale about barnyard animals who plan to become musicians in Bremen, but actually never get there after scaring off some robbers and moving into their house instead. Even so, the group of animals is forever associated with the town of Bremen, even featuring in a famous statue.

Together, the two cities of Bremen and Bremerhaven make up the smallest state in Germany, which is called the Free Hanseatic City of Bremen, but there are still many fun things to explore in this small area.

In this post, we’ll be sharing our top picks for places to visit in Bremen, both in and around the two cities.

We hope you enjoy our recommendations, and be sure to let us know in the comments which Bremen must-sees we should add to our list!

One of the cutest parts of Bremen to visit is the preserved medieval neighbourhood known as Schnoor, located next to the River Weser by the Wilhelm-Kaisen-Brücke (Bridge).

Back in the day, Schnoor used to be the poorer part of Bremen, mostly inhabited by fisherfolk since it was next to the river. The name Schnoor actually means string, since the neighbourhood was also where many ropes and cables were produced for shipping.

Today, Schnoor is one of the most popular places to visit in Bremen. Nearly all the buildings here are tall and narrow, many with timber frames looking down over the winding cobbled alleys. Exploring this area is a delight, as there are all manner of cute cafés, bakeries, tea shops, and stores selling everything from clothing to musical instruments to toys.

There are also many art galleries in Schnoor, as well as a theatre and a couple of interesting museums. A wander through this historic neighbourhood is an absolute must while in Bremen!

Bremen’s City Hall is one of the best examples of Brick Gothic and Weser architecture in Bremen, which is why it’s also a UNESCO World Heritage Site, together with the Bremen Roland statue standing in front of it.

On the exterior walls of the hall, you’ll find 16 sculptures of emperors, prince-electors and philosophers. In front of the hall is a statue of a knight with a drawn sword, which is called a Roland (for the mythological figure who fought under Charlemagne) and denotes that a German medieval city had town privileges.

Apparently, so long as the statue remains then Bremen will remain a free and independent city. It’s also commonly believed that there is a spare statue kept within the vaults of the town hall in case the statue should ever fall, they can quickly replace it!

While here, you can easily admire another one of Bremen’s main tourist attractions – a statue of the Musicians of Bremen from the fairytale, which can be found between the City Hall and the Church of Our Lady on Schoppensteel Street.

Bremen’s City Hall faces out over another one of the prettiest places to see in Bremen, the Marktplatz or main square of the city.

This square is no longer used for markets (except during Christmas when there is quite a magical Christmas Market to experience) but it is ringed by historic buildings and cosy cafés for people watching. The Friemarkt Fair is also held here in October each year and is one of the oldest fun fairs held in Germany, going strong since 1035.

Along with the town hall, Bremen’s Cathedral (more on that later) and State Parliament building tower over the cobbled Marktplatz. Make sure to also keep an eye out for the Bremer Loch, or “Bremer Hole”, a bronze donation box that’s installed in the ground in front of the parliament building. If you put a coin in, it will play a musical thank you from one of the four animal musicians!

Not far from Bremen’s city centre is a delightful promenade next to the river known as the Schlachte.

Named for the street next to the river, this area was once part of Bremen’s harbour but is now more famous for being lined with restaurants, pubs, beer gardens and boats, some of which also offer onboard dining. Visitors can enjoy a stroll next to the river or take advantage of a boat cruise to see the sights.

While the Schlachte is definitely a great spot for a German beer in summer, you can enjoy it year-round. On Saturdays, there’s a flea market held on the promenade and during winter it’s the location of a unique Christmas market, where even the ship masts are strung with festive lighting.

One of the most unique things to see in Bremen is Böttcherstraße, a small street that’s only about 100 metres long, but packed with unusual architecture and interesting relief sculptures.

While parts of Böttcherstraße (and Bremen itself) date to the Middle Ages, many of the most interesting buildings here were built by Ludwig Roselius, a German coffee merchant who founded the company Café HAG (originally Kaffee HAG in German). He had a number of modern buildings constructed in different expressionist styles, which have been protected since 1973.

A wander down Böttcherstraße will lead you to see some fascinating sculptures and architectural styles, like the House of the Seven Lazy Brothers which features statues of the not actually lazy brothers.

Other highlights include the curved dome of the Paula Modersohn-Becker Museum, the beautiful Glockenspiel House (pictured below) which houses 30 bells made of Meissen porcelain, and the golden Lichtbringer sculpture of the archangel Michael at the entrance to the Böttcherstraße street.

North of the city of Bremen is a district called Bremen-Vegesack that’s usually just shortened to Vegesack by locals.

This neighbourhood is located further up the Weser River where it connects with the Lesum River and was traditionally used for sailing ships to berth in winter or during bad weather. Between 1619 – 1623 a proper harbour was constructed here, which was also both the first artificial harbour of Germany, and one of the first in Europe!

Today Vegesack’s harbour is a sort of open-air museum rather than a working harbour, with the beautiful full-rigged sail training ship Schulschiff Deutschland one of the highlights. The first weekend of June is also when the Vegesacker Hafenfest (harbour festival) takes place, featuring live music, shanty choirs, maritime attractions and stands offering up culinary delights.

The Rhododendron-Park und Botanischer Garten Bremen is easily one of the most beautiful places in Bremen, featuring 46 hectares of gardens, most of which focus on rhododendrons and azaleas.

Every year for six weeks around the month of May, more than 1,000 types of rhododendron and azalea bushes come into bloom in a stunning display of colour. Even if you visit outside of this period, there’s also a lovely botanical garden with different sections displaying other plants from around the world.

One of the best parts of Bremen’s Rhododendronpark is that it’s completely free to enter, and you only need to pay a small fee if you also want to explore the Discovery Centre and thematic greenhouse complex called Botanika. It’s a fun way to experience plants from the mountains of the Himalayas to the rainforests of Borneo without ever leaving Bremen!

One of the best places to visit in Bremen on a rainy day is the Kunsthalle Bremen, an art museum located close to the Bremen Old Town on what’s known as the “Culture Mile”.

The Kunsthalle Bremen was designed and constructed by the city’s art society in 1849, becoming the first such society in Germany with its own building. And while places like Berlin, Munich and Paris may be more famed for their art, Bremen’s gallery contains a surprising number of works by well-known greats.

Inside the Kunsthalle Bremen are paintings and sculptures dating from the 14th century, including pieces by Claude Monet, Édouard Manet, Vincent Van Gogh and Paul Cézanne.

During WWII many pieces from the collection were moved to keep them safe from bombing after the original Washington Crossing the Delaware by Emanuel Leutze was burnt by a fire bomb. Unfortunately, many pieces were looted and more than 1,500 works from the Kunsthalle remain missing today.

If you’re looking for Bremen places to visit where you can eat and also enjoy nice views then you shouldn’t miss Mühle am Wall, a restaurant in a former flour mill that’s surrounded by gardens!

When you look at Bremen on Google maps you can see a sort of zig-zag-shaped park next to water surrounding the eastern edge of the city centre. These parks were once part of the city’s ramparts, or walls, which served as Bremen’s defence along with a moat. Within the walls were six gates as well as six grain mills.

While the walls and windmills were later removed, one of the mills was reconstructed on the original spot in 1833 and renovated in 1998, when a café was also opened inside. Today the sight of this Dutch-style windmill is a surprising symbol of Bremen and usually called the coffee mill by locals.

As well as coffee, snacks and lunch, Mühle am Wall offers a set brunch menu on Sundays. Don’t miss the flower field directly next to the windmill for your photos either!

Bremen’s Cathedral, also called Bremer Dom or St Petri Dom, is an imposing structure which stands next to the Bremen City Hall on Marktplatz.

The current building was constructed between 1043-1072, after the church before it was destroyed in a fire. It was built in the cruciform style with rounded Romanesque arches and a crypt beneath. Between 1219-1258 the more Gothic parts of the cathedral were added although it fell into disrepair when Protestantism swept through northern Germany around the 1520s.

Both of the main towers also collapsed at different times, one of which remained an open ruin for nearly two and a half centuries. The cathedral was restored in the 1880s, reopening in 1901 and today receives around 420,000 visitors per year.

Highlights when visiting include the Cathedral Museum, where guests can learn more about the history of the building for free. You can also climb up to the viewing platform of the south tower and descend into the crypts to see mummies from centuries past!

Universum Bremen is one of the most fascinating Bremen attractions; a science museum where visitors are encouraged to touch and explore around 250 interactive exhibits!

Not only are the museum exhibits fascinating, but the museum building itself is worth a stop just for a photo of the eye-catching curved metallic building, which looks a bit like a crashed or parked UFO, depending on which side you view it from.

There are three main themes explored in the museum: Technology, Humans and Nature. Since 2007 there has also been an outdoor area with exhibits about water and wind, including a tower offering views over the city from 27 metres high.

The Universum Bremen is definitely a great place for kids in Bremen, or just anyone who is interested in science and/or likes interactive exhibits rather than just looking at stuff.

Did we miss any of your favorite places to visit in Bremen?