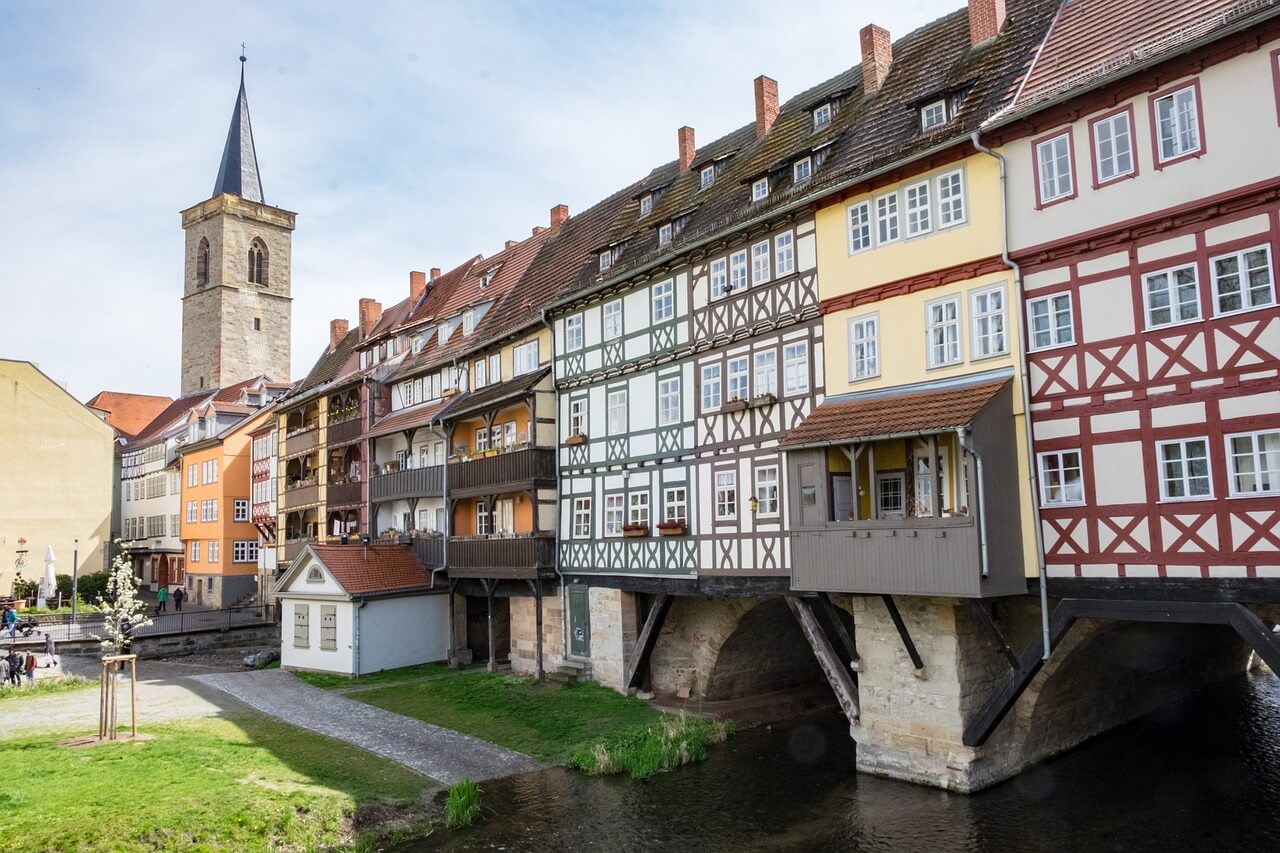 Known as the “Green Heart of Germany”, the state of Thuringia offers visitors many natural places to explore, as well as exciting man-made attractions.

Thuringia is most known for its dense forests, walking trails and winter sports, but that’s not all there is to discover here!

In this list of beautiful places to visit in Thuringia, we’ll be sharing some of our favorite destinations in this underrated state, including fascinating cities and stunning castles.

We hope you enjoy our recommendations, and be sure to let us know in the comments if there are any Thuringia must-sees you would add to our list!

The state capital of Erfurt is easily one of the best Thuringia attractions to explore, especially since it escaped WWII virtually unscathed.

Erfurt’s Old Town is one of the best-preserved in Germany, so it’s perfect for a wander around if you want to feel like you’ve stepped back in time. Enjoy seeing the medieval half-timbered houses and walk across the Krämerbrücke (Merchant Bridge), which is a medieval arch bridge lined with shops and houses.

Erfurt was once known as the “City of Towers” since it contained 25 parish churches, 15 abbeys and monasteries and ten chapels, all with lofty spires reaching to the heavens. Today St. Mary’s Cathedral and the Church of St. Severus are the most impressive examples of German Gothic architecture in the city.

Don’t miss out on Petersberg Citadel either, as it’s one of the largest and best-preserved town fortresses in Europe, surrounded by over two kilometres of stone walls.

The unique Wartburg Castle is one of the most-visited Thuringia tourist attractions and a UNESCO World Heritage Site to boot.

It perches on a hilltop overlooking the town of Eisenach and is thought to have been an inspiration to Ludwig II when building Neuschwanstein.

Over the course of its lengthy history, Wartburg has served as a home for both Saint Elisabeth of Thuringia and Martin Luther (during his exile after being excommunicated by Pope Leo X).

Providing an overview of 1,000 years of German history, Wartburg was actually the first German castle to be designated a UNESCO World Heritage site and still draws visitors from all around the world to see the reconstructed interiors. As well as the castle museum, there are a number of art collections on display inside Wartburg, so be sure to pay it a visit if you get the chance!

PRACTICAL INFORMATION FOR VISITING: Castle Wartburg is open every day but the opening and closing times vary seasonally so check the website before you plan your visit. The courtyard and grounds are free to visit while it costs €12 for adults to enter the museum.

Just 30 minutes from the capital of Erfurt, the town of Weimar is another one of the best places to visit in Thuringia, particularly if you are a fan of Goethe, art and/or castles.

Johan Wolfgang von Goethe is the most famous one-time resident of Weimar, living there from the age of 26 until his death at 82. Fans of his work can visit the Goethe Museum in his former home in order to see where this German playwright, poet, novelist, scientist, statesman, theatre director, and critic penned some of his most well-known works, including Faust.

Weimar has also been an important site for historical eras such as the German Enlightenment, the Weimar Classicism movement and the Bauhaus movement, leading to a number of UNESCO World Heritage Sites in the city centre.

There are also many museums, palaces, castles and gardens to discover, particularly the Duchess Anna Amalia Library which houses works of German literature.

For castle lovers, Kochberg Castle and Park is another one of the prettiest places to see in Thuringia!

This picturesque castle was once the estate of the von Stein family, which also has connections to Goethe as he had a close relationship with Charlotte von Stein, and visited regularly. Parts of the castle date as far back as 1380 although the main building that can be seen today is from the 17th century.

Along with the preserved estate buildings, there’s also a unique amateur theatre that was built around 1800 and is still in use today. Surrounding the castle are charming kitchen gardens, meadows, fruit trees and a forested area with hidden ponds. Guests can have lunch at the on-site restaurant or just enjoy the castle grounds.

PRACTICAL INFORMATION FOR VISITING: It’s free to enjoy the castle grounds and costs €5 for adults to enter the castle. In summer the castle is open Wednesday – Monday from 10am until 6pm but check the website for dates closer to your visit.

Gera is the third-largest city in Thuringia and was once one of the richest due to its booming cloth and fabric industry.

And while it may not be quite the industrial hub of years past, Gera still offers some beautiful sights, particularly the restored buildings which demonstrate examples of Gründerzeit architecture and modern-style Bauhaus buildings. The famous German painter Otto Dix was also born in Gera, with his former home now a museum dedicated to his life and works.

Other popular attractions in Gera include the magnificent art nouveau villa known as Haus Schulenburg which contains gorgeous paintings as well as its original furnishings. The Baroque Orangerie houses the Gera Art Collection and is surrounded by beautiful gardens that are free to enjoy.

Gera is also home to numerous stunning churches, including the neo-Gothic St John’s Church pictured below.

One of the most unique Thuringia places to visit is the series of “fairy” grottos located in a former alum mine in Saalfeld.

These fairy grottos (known as Feengrotten in German) were naturally formed over hundreds of years, and when the caves were rediscovered in 1910, people spotted that some of the rock formations resembled fairies.

The sight is so unique that even the Guinness Book of World Records has listed the Feengrotten as the most colourful cave grottos in the world.

Today, the three main chambers are open to visitors who want to experience a magical world of caves, pools and theatrical lights illuminating rock formations that resemble a miniature fantasy land.

Above ground, there is also an enchanting fairy forest for children, as well as a museum about the grottos, places to eat and even a caravan park.

PRACTICAL INFORMATION FOR VISITING: There are a number of ticket combos available so we recommend checking the website to see what works best for you. The Adventure World is usually open daily from 10am until 5pm, but again, make sure you check the website ahead of time.

Hainich National Park is one of the best natural places to visit in Thuringia, as well as another UNESCO-listed attraction to explore.

For the best views of some of Germany’s untouched primaeval beech forests head to the Canopy Walk (Baumkronenpfad im Nationalpark Hainich on Google Maps), which winds for 530 metres above the trees. There are info panels along the way to provide information about the area and its ecosystem.

If you want to guarantee a sighting of the shy wildcats that live in the park, head to the Wildcat Village Hütscheroda just on the edge of the National Park. There is information about the rescue project for these native cats as well as some cats in a large enclosure with a hiking trail and lookout point around it.

Not only does Bad Langensalza possess a beautifully preserved Old Town area and multiple stunning gardens, but it’s also a historic spa town of Thuringia.

Sulphuric springs were discovered here in 1811 and opened as a tourist attraction in 1812, remaining a popular drawcard for visitors to Bad Langensalza to this day. The city was very prosperous, which can be seen in the walled and well-preserved Old Town. In fact, the city is part of the German Timber-Frame Road since it has so many medieval half-timbered houses to see.

Along with pretty medieval buildings and spas, Bad Langensalza boasts a multitude of incredible public gardens to enjoy. One of the most notable is the authentic Japanese Garden, although the rose garden (with on-site restaurant), magnolia garden, arboretum and botanical gardens are all stunning.

If you time your visit for August you can also experience the town’s medieval festival with locals in traditional dress as well as examples of medieval crafts, handwork, martial arts, food and music.

One of the most beautiful places in Thuringia is the 18th-century palace, Schloss Belvedere, which is located just outside of Weimar.

Not to be confused with the Belvedere Museum in Vienna, this German Belvedere was originally built as a pleasure palace for the Ducal family in Weimar and is now open to the public as a gorgeous museum.

Inside this 18th-century Baroque residence are opulent rooms housing a collection of art, crafts, porcelain and furniture.

The park and gardens surrounding the palace are also worth visiting for a stroll, particularly in spring or summer. There’s an English landscape garden, an Orangery and a maze, along with fountains, sculptures and an artificial ruin called the Great Grotto.

PRACTICAL INFORMATION FOR VISITING: It’s free to wander in the palace park and gardens while entrance to the museum costs €7 for adults. Schloss Belvedere is open from 10am-6pm Tuesday to Sunday in summer, but check the website for opening times in other seasons.

While Altenburg is another lovely German town in Thuringia with historic architecture to see, it’s also home to a number of more unusual museums and attractions as well.

There are a number of beautiful sights in Altenburg, including the main market square, an open cobblestoned area lined with lovely buildings and watched over by the impressive red Brüderkirche (pictured below). Altenburg’s castle and the art of the Lindenau-Museum are also popular spots for visitors to enjoy.

The popular German card game known as Skat was also developed in Altenburg, leading the city to often be called playing cards town. And for those interested in this side of Altenburg, there is a playing card museum inside the castle.

Looking for more offbeat sights? One of the weirder things to see in Altenburg is the mummified rat king on display at the city’s museum of natural history.

… And, the city is also home to a brewery museum for those who are more into beer than dead rats!

As the second-largest city in the state, it’s not surprising that Jena is also home to one of the most interesting things to see in Thuringia, the oldest still-operating planetarium in the world.

The Zeiss-Planetarium was first opened in 1926 and projects the planets and fixed stars onto the inside of a white dome. There are plenty of other cool things to see in Jena besides the planetarium though, including a variety of museums, particularly the optical museum for those who are interested in optical instruments like glasses, microscopes, cameras and telescopes.

Jena is also home to one of the oldest botanic gardens in Germany (which is beautiful), a number of stunning churches, parts of the original city walls and the town hall’s astronomical clock.

The Jen Tower is the city’s highest skyscraper and contains a sky restaurant for a very romantic meal while enjoying views over the city!

Did we miss any of your favorite places to visit in Thuringia?