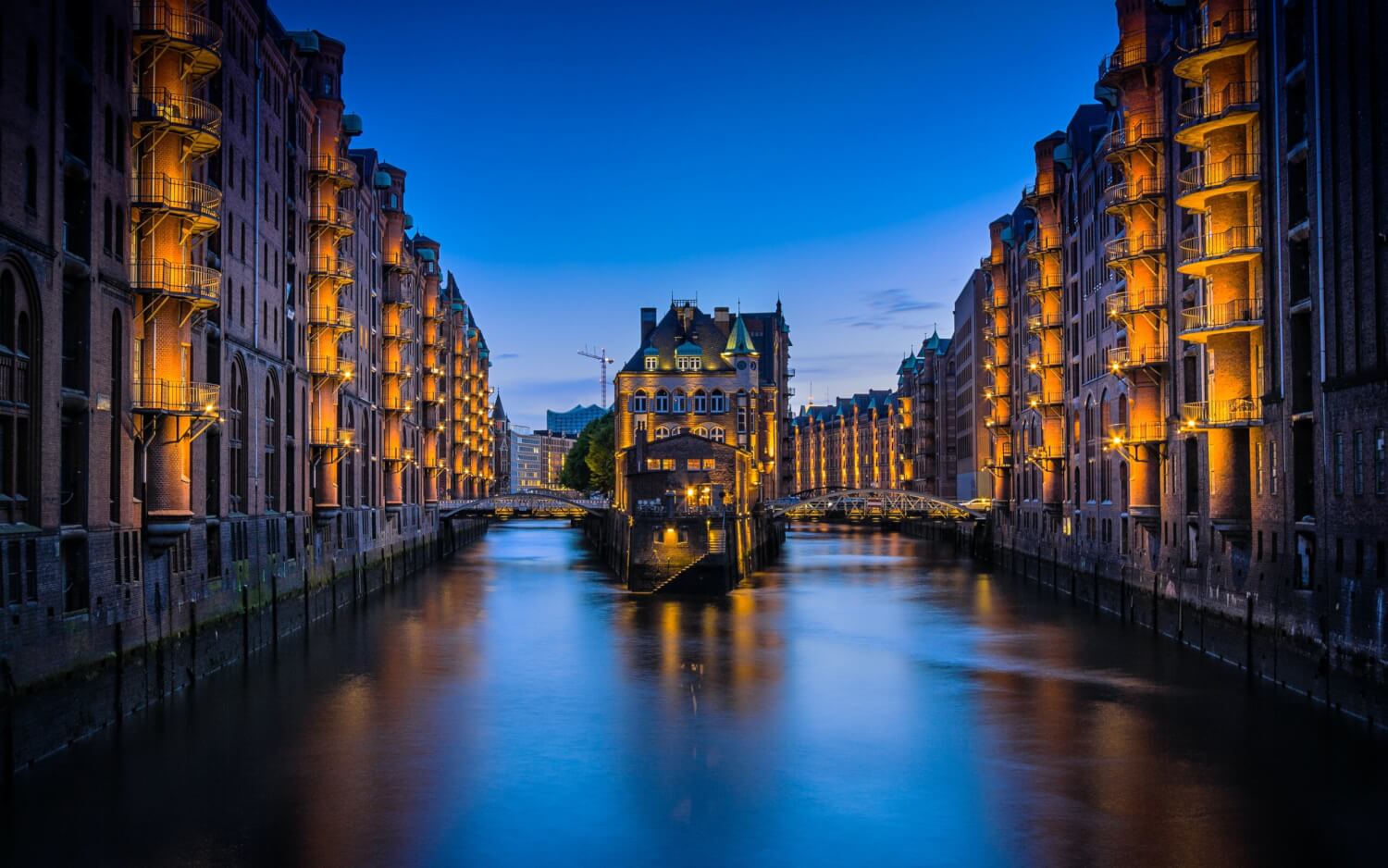 From historic buildings and wide areas of green space to, of course, plenty of waterways, Hamburg is a city that offers visitors a wide range of things to explore!

Hamburg is a major port city in Northern Germany, and the second-largest city in the country after Berlin. Connected to the North Sea by the River Elbe, Hamburg is most known for the 100s of canals crisscrossing the city, as well as its historic architecture, with a few more modern pieces as well.

In this list of beautiful places to visit in Hamburg, we’ll be sharing some of our favorite destinations in this gorgeous pearl of a city, including the most beautiful and unusual attractions.

We hope you enjoy our recommendations, and be sure to let us know in the comments if there are any Hamburg must-sees you would add to our list!

Often nicknamed Elphi by Hamburg locals, the Elbphilharmonie Hamburg is one of the largest concert halls in the world and one of the most popular Hamburg attractions, whether you head inside for an event or just take a photo from outside!

Featuring a glass construction (that looks kind of like an iceberg) on top of an old brick warehouse, the eye-catching concert hall was opened in 2017 and is now the tallest inhabited building in Hamburg. There are three main concert venues within the building, the largest one (The Great Concert Hall) can accommodate 2,100 people and also contains a pipe organ with 69 registers.

Along with the concert venues, the Elbphilharmonie Hamburg has a viewing platform over the city on the floor where the glass has been added to the old warehouse – you can see it in the picture below. There are also three bars where guests can get refreshments during events and there’s a five-star hotel within the structure if you want to actually stay there!

Another one of the most popular Hamburg tourist attractions is Miniatur Wunderland, a model railway and mini airport that’s also (ironically?) the largest of its kind in the world.

Obviously, this would be a wonderful thing to do in Hamburg with children, but anyone is sure to feel a touch of nostalgia once they step foot into this absolute wonderland of a miniature world. And we do mean that literally, with different sections showing tiny versions of the USA, Austria, Italy, Rio de Janeiro and Hamburg itself, among others, along with moving trains, planes and boats everywhere!

There’s also a VR experience at Wunderland, where you can experience shrinking down to the size of the models and have to work as a team to complete challenges. Or you can join a guided backstage tour to see how everything works.

PRACTICAL INFORMATION FOR VISITING: Miniatur Wunderland is open 365 days a year, from between at least 9.30 am – 6 pm, but also opening earlier and closing later on weekends and holidays so make sure you check their opening times before you go. Tickets cost €20 for adults and €12.50 for children under 16.

Even though it’s ‘just’ a government building, the city hall (Rathaus in German) is one of the most beautiful places in Hamburg and well worth a visit.

Construction of this richly decorated Neo-Renaissance building was completed in 1897 after the old city hall was destroyed in a fire. The 112 metre (367ft) high tower can be seen from many parts of Hamburg and dominates the main market square.

Visitors can see the main hall for free, where there’s an exhibition about the history of the city. For a small fee, you can also tour the rest of the opulent buildings within, which includes seeing the magnificent Hygieia fountain in the central Italian piazza. The statue, named for the Greek goddess of health, was built in remembrance of the cholera epidemic that swept through the city in 1892.

PRACTICAL INFORMATION FOR VISITING: If you want a guided tour of the Rathaus, make sure you check the opening times in advance as tours are only offered on days when the building is not being used by parliament or the mayor. There are regular tours in English and German for €5.

One of the most fascinating places to visit in Hamburg is the International Maritime Museum, especially if you’re at all interested in model ships.

This museum houses the private collection of Peter Tamm, a journalist and collector. During his lifetime he managed to amass a collection of more than 40,000 items including model ships, construction plans, uniforms, and maritime art, as well as more than a million photographs! There’s even a 3000+ year old dugout boat on display that was found in the Elbe River.

Peter Tamm’s collection is now a museum that’s also located in the oldest preserved warehouse in Hamburg, built between 1878 and 1879. If you’re looking to start your own model ship collection, there are cute ones for sale in the gift shop, and we also really love the bags made from recycled ship sails as well!

PRACTICAL INFORMATION FOR VISITING: It costs €15 to visit the museum, which is usually open daily from 10am to 6pm. Make sure you check the website before going though, as it is occasionally closed for special events.

Speicherstadt is the largest warehouse district in the world where the buildings stand on timber-pile foundations. For those keen to admire this feat of engineering, it is hands down one of the best places to visit in Hamburg.

This warehouse city is also a UNESCO World Heritage Site, with beautiful neo-gothic brick architecture making a marked contrast with some of the more modern buildings nearby, like the Elbphilharmonie Hamburg. There are many fun things to explore within this district, including the International Maritime Museum and Miniatur Wunderland which we mentioned above.

Other attractions worth exploring within this warehouse district include the Deutsches Zollmuseum (German Customs Museum), the Speicherstadtmuseum (showing goods and tools from warehouse companies), and Spicy’s Gewürzmuseum, which is a fascinating museum of herbs and spices!

One of our personal favourite Hamburg places to visit is the city’s main port, which is often called ‘Germany’s gateway to the world.’

Hamburg’s port has been the main port in Europe for centuries and is still the third-busiest port in Europe after Rotterdam and Antwerp. Situated on the River Elbe 110 kilometres (68 miles) from the North Sea, it’s the biggest port in Germany but not only is it used for transporting goods and people, it’s also home to a number of interesting attractions, including both a coffee museum and a chocolate museum!

Don’t miss the Landungsbrücken (pictured below) either; this 700-metre-long section is actually a floating platform where cruise ships often dock. The tower of the water station shows both a clock and the water level, and also rings the ship’s bell every half hour.

If you’re looking for more natural things to see in Hamburg, then a trip to the Planten un Blomen and Wallringpark just outside the city centre is a must.

Similar to other formerly fortified German cities like Bremen, the main city centre of Hamburg was once surrounded by walls that have been reclaimed as parkland, at least on the western side. Planten un Blomen (which is Low German for Plants and Flowers) is located within 450,000 square metres of reclaimed land, dating from 1821.

The park is free to enter and contains numerous stunning garden displays, as well as three small lakes. Some of the highlights include the tranquil Japanese garden (complete with a tea house), the greenhouses and the rose garden, which displays more than 300 varieties. It looks incredible in summer when in bloom!

It’s also possible to play miniature golf or chess within the park, and in winter an ice-skating rink draws many visitors. Plus at night in summer, the fountains are illuminated and accompanied by classical music for a magical evening display… All in all, this is a Hamburg must-visit no matter the season.

There are five main Lutheran churches in Hamburg, and St Michael’s might just be the most famous of these. It’s also the largest church in the city.

Unlike many churches in Hamburg, St Michael’s was actually built Protestant, in a gorgeous Baroque style. The 132-meter high copper-covered spire has long been a landmark in Hamburg and was often used by ships sailing on the River Elbe for navigation.

Above the main entrance of the church is an imposing sculpture of St. Michael’s Victory over the Devil and the church is indeed dedicated to the archangel Michael (who’s also sometimes called St Michael or Saint Michael the Archangel). Inside there are five different organs, as well as a crypt with exhibitions. It’s also possible to climb the famous tower, for a fee of €6.

With mentions dating back as far as 1304, Deichstrasse is the oldest remaining street in the centre of Hamburg and also contains some of the city’s oldest buildings.

Many of the timber-framed buildings on Deichstrasse date from the 17th–19th centuries, and have been carefully restored after The Great Fire of 1842. Today this street is often referred to as ‘restaurant alley’ since there are many excellent restaurants, bars and cafés to explore.

It might surprise you to learn that Hamburg contains more canals and bridges than Venice or Amsterdam combined. The buildings on Deichstrasse are a great example of how water was used in the city, as they could be entered from the street or the Nikoaifleet canal.

If you want a photo of the water side of the buildings, head to the bridges of Hohe Brücke or Holzbrücke on either end of the Nikolaifleet canal.

Another famous street in Hamburg is the Reeperbahn, although this one is more famous for being home to the city’s red-light district than for its historic buildings!

Reeperbahn is the main nightlife street in Hamburg, lined with restaurants, nightclubs, discotheques and bars, as well as a fair few sex shops, strip clubs and brothels. Local Germans have nicknamed it die sündigste Meile, which means ‘the most sinful mile, and it’s definitely the spot to come for some uncensored fun.

In the early 60s, British rock band The Beatles played in several clubs here before achieving worldwide fame and apparently also got up to some major hijinks! John Lennon is also famously quoted as saying “I might have been born in Liverpool – but I grew up in Hamburg.”

Today there is a circular plaza at the cross of Reeperbahn and Große Freiheit made to look like a vinyl record with statues of the Beatles surrounding it. It’s called Beatles-Platz and is a must-visit for any Beatles fans in Hamburg!

The underground Alter Elbtunnel is definitely one of the most unusual places to see in Hamburg, especially if you can time your visit for one of their exhibitions.

This tunnel is a century old, but has been modernized, and runs underneath the River Elbe to connect the city centre to the docks and shipyards on the south side of the river. Pedestrians and cyclists can use the tunnel 24 hours a day, while motorized vehicles have set times to access the tunnel via special automobile elevators.

There is a newer tunnel and plenty of bridges for getting across the river these days, but the Old Elbe Tunnel retains a certain nostalgia when using the lifts down, and spotting terracotta ornaments of fish or rats or crabs along the walls.

Did we miss any of your favorite places to visit in Hamburg?