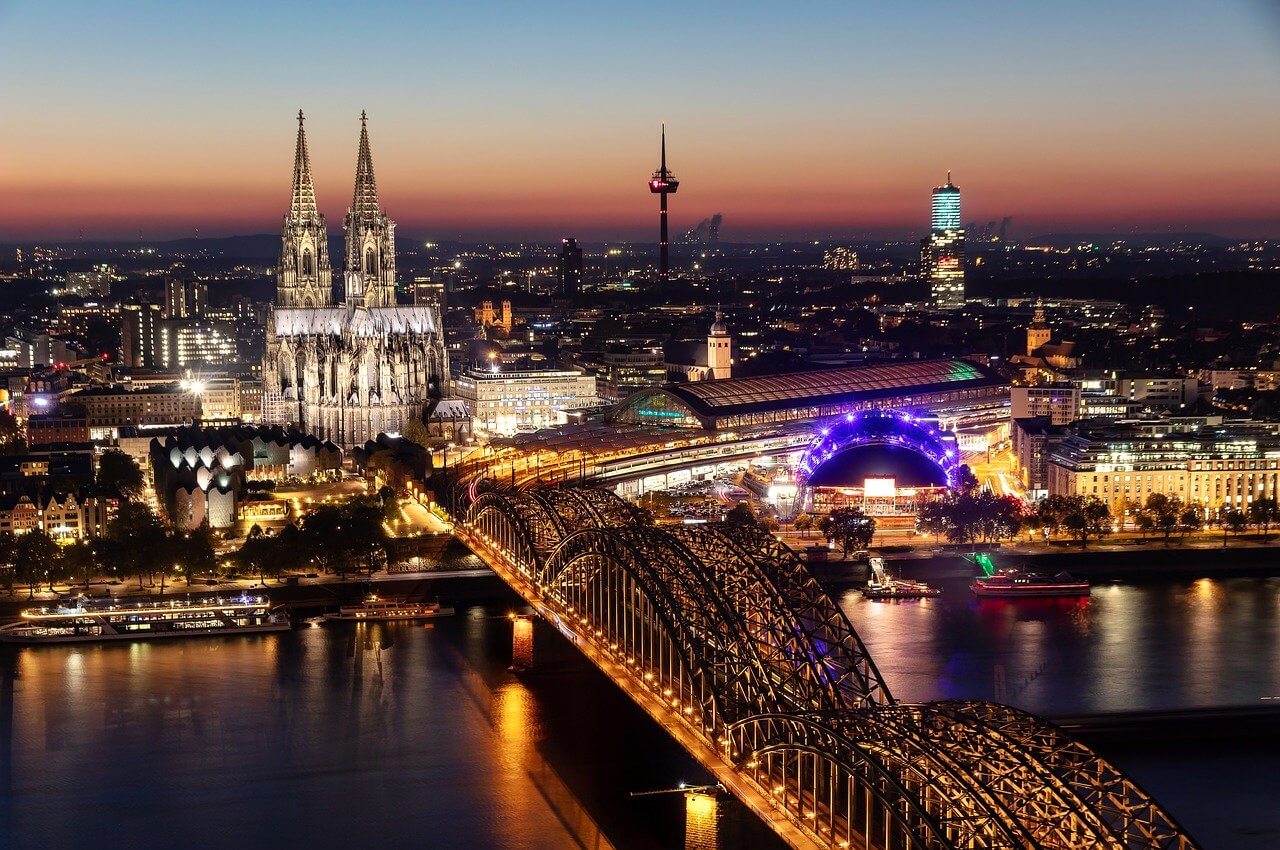 The dynamic German state of North Rhine-Westphalia contains the most castles and fortresses in Germany, but there are also many cultural highlights to explore, with a little something for everyone.

And while some of the most famous places in NRW are cities like Cologne and Düsseldorf, there is plenty more to discover beyond city life.

In this list of beautiful places to visit in North Rhine-Westphalia, we’ll be sharing some of our favorite destinations in Germany’s most densely populated state, including the most beautiful natural locations, the best castles and the most fascinating cities.

We hope you enjoy our recommendations, and be sure to let us know in the comments if there are any North Rhine-Westphalia must-sees you would add to our list!

It could be argued that Aachen Cathedral is the most important of all places to see in North Rhine-Westphalia, as it was both the burial place of Charlemagne and one of the very first UNESCO World Heritage sites in the world.

The city of Aachen was Emperor Charlemagne’s preferred medieval Imperial residence and he had the Aachen Cathedral (Aachener Dom in German) constructed there around 796. He was then buried in the cathedral following his death in 831 and the cathedral became an important site of pilgrimage.

Aachen Cathedral was one of the first 12 items listed by UNESCO as a world heritage site because it was so important to the Holy Roman Empire. The main Palatine Chapel was constructed in a Carolingian-Romanesque style, while the Gothic Choir was added later. The cathedral was damaged by bombing during WWII but extensively restored to its former glory.

Not only is Aachen Cathedral a historic and truly stunning construction but it also contains a number of important medieval art objects (aside from the remains of Charlemagne) which make it well worth a visit.

Another one of the most important North Rhine-Westphalia attractions is the cathedral and old town area of Cologne, the state’s largest city.

Cologne Cathedral is the most-visited landmark in Germany, a UNESCO World Heritage Site and the tallest twin-spired church in the world.

Around 20,000 people visit it every day, to marvel at the stunning Gothic architecture and the Shrine of the Three Kings – which is a gold sarcophagus believed to hold the remains of the Three Wise Men who visited Jesus after his birth.

Close to Cologne Cathedral is Cologne’s Old Town, an area with many preserved historic buildings, often in pretty pastel colours. The famous shot below shows the Great St. Martin Church as seen from behind, on the square that was once a fish market next to the Rhine River.

On the main Old Town square, visitors can also see the Cologne Town Hall, which was constructed in the 12th century and is the oldest city hall in Germany still in use.

With its many picturesque half-timbered houses and a 13th-century castle overlooking it, Monschau is one of the prettiest places to visit in North Rhine-Westphalia.

The Rotes Haus (Red House – although it looks more of a peachy pink to us) is the most famous building in Monschau and a museum showing how the original wealthy cloth merchant owner would have lived. We definitely recommend heading inside to see the lavish Rococo, Louis XVI, and Empire-style furnishings on display.

And for those keen to sleep in a castle (on a budget, no less!) Burg Monschau was renovated into a youth hostel after WWI, and you can still stay there today in either dorm rooms or family villas. The castle courtyard is also where the Monschau Festival is held every summer, with performances by musical artists and orchestras.

The town of Xanten is one of the best places to visit in North Rhine-Westphalia if you’re interested in Roman history as it contains one of the largest archaeological open-air museums in the world.

Like many German towns, Xanten has a pretty medieval Old Town centre to explore, with an impressive cathedral. It’s also the only town in Germany to start with an X! But the main drawcard for most visitors is the impressive open-air museum showing ruins and reconstructions of the ancient Roman settlement of Colonia Ulpia Traiana.

This open-air museum is (not surprisingly) quite large, so you really get a sense of the size of the Roman town while exploring the remains of the amphitheatre and temple. There’s also an interior museum inside a reconstruction of the town’s bathhouse, with plenty of information about Colonia Ulpia Traiana.

PRACTICAL INFORMATION FOR VISITING: It costs €9 for adults to enter the Xanten archaeological park and children under 18 can enter for free. If you time your visit for the first Monday of the month then everyone can go for free! Opening times vary throughout the year so check the website before you go.

Eifel National Park borders Belgium and is one of the most beautiful places in North Rhine-Westphalia.

This wilderness area was shaped by volcanic activity hundreds of years ago, which made the landscapes very dramatic.

There are crater lakes, extinct volcanoes, quarries, domes, rubble hills, waterfalls and geysers almost everywhere you go. One of the best ways to explore is via the Germany Volcano Route, which connects areas of geological, natural and cultural significance between the cities of Bonn and Trier.

There are many opportunities for hiking or skiing within the national park, depending on the season of course, and while autumn is particularly stunning, it’s beautiful at any time of year.

Schloss Drachenburg is easily one of the most popular North Rhine-Westphalia tourist attractions, especially for anyone who loves picture-perfect fairytale-looking castles!

One of the most fascinating aspects of this gorgeous palace is that it only took two years to build (between 1882–1884) which is not usually the case for castles. It was commissioned by Baron Stephan von Sarter, who was a broker and banker, although he never actually lived in it.

In the years since it was built, Schloss Drachenburg was used as a tourist attraction, a women’s convalescent home, a boarding school and a training facility for the Federal Railways, before it began to fall into disrepair. Luckily the castle has been restored and is once again a tourist destination, although it’s closed in January and February.

PRACTICAL INFORMATION FOR VISITING: General entry costs €7 for adults and while the castle is mostly open daily from at least midday – 5pm (and longer in summer) there are some closures throughout the year, so make sure you check the website before you plan to visit.

One of the most incredible things to see in North Rhine-Westphalia is the sacred sandstone rock formation known as Externsteine, which also has a very strange history.

The stones are naturally occurring but many myths and misinformation sprung up around them in the centuries following the late 700s when Christian monks settled there and then began carving stairs and reliefs into the stones.

When Germany was under Nazi rule, Heinrich Himmler was the head of the Nazi’s occult division “Ahnenerbe,” and his pseudo studies of the site led to it becoming a focus of nationalistic propaganda. Apparently, the Nazi Youth even gathered at Externsteine to sing pagan hymns on the summer solstice and Hitler’s birthday.

Today, the stones are a popular site of pilgrimage for Neo-pagans and regular tourists. There’s also still a Woodstock-like festival held every year at the site on the summer solstice.

The Zollverein Coal Mine Industrial Complex is a UNESCO World Heritage Site and one of the most fascinating North Rhine-Westphalia places to visit.

As one of the anchor points on the European Route of Industrial Heritage, the Zollverein Coal Mine Industrial Complex provides a physical example of both the evolution and decline of the mining industry in the past 150 years. Operating between 1847 and 1986, it was one of the largest coal mines in Europe and is still sometimes called the most beautiful coal mine in the world.

Today the site is a fascinating museum complex, with exhibitions on the geology, archaeology, industrial and social history of the region located within different sections of the mine. There are also regular special events, exhibitions and talks held on the site, while in summer you can even go for a swim in the middle of the former coking plant!

PRACTICAL INFORMATION FOR VISITING: There are four main sections to the site, each with different opening hours and prices, so we suggest checking out the official website for all the info you need.

If you’ve ever wished you had your own life-sized Barbie Dreamhouse then a trip to Schloss Benrath will probably fulfil all of your pastel pink fairytale fantasies!

This Baroque-style pleasure palace was constructed between 1755 – 1770 for the Elector Palatine Charles Theodor and his wife. Even parts of the opulent interiors are pink as well, so this is definitely a popular spot with the Instagram crowd.

The complex features a main building, which was the Elector Palatine’s residence, flanked by two arched wings on either side, which was where the servants lived. Today there are three museums within the three buildings, the Museum Corps de Logis (where you can explore the castle interiors), the Museum of Garden Art and the Museum of Natural History.

We also recommend spending some time in the expansive formal gardens, which are gorgeous. There’s a pretty Christmas market held in the forecourt of the palace during the festive season and a spectacular festival of lights one night in August with music by the Düsseldorf Symphony Orchestra.

PRACTICAL INFORMATION FOR VISITING: Tickets to see the palace museum, garden and Natural History Museum cost €14 for adults, while a ticket for just the two museums on the wings (the Natural History Museum and Museum of Garden Art) costs €6. The museums are closed on Wednesday and Thursday with differing opening hours on the other days, so check the website if you are planning a visit.

While the city of Düsseldorf is known for its fashion and art scene, we think the port borough of Düsseldorf-Hafen is actually the most interesting spot to visit.

Located on the River Rhine, Düsseldorf-Hafen is the city’s docks area, but it’s additionally become a very hip spot with many restaurants, bars, and a few clubs to experience. This is also where you can find the most modern architecture in the city, particularly the Neuer Zollhof landmark (next to the TV tower in the photo below) of three crooked-looking buildings designed by architect Frank O. Gehry.

The Rheinturm Tower is the tallest building in Düsseldorf, used to carry TV and radio signals, but it can also be visited for spectacular views over the city. There’s a revolving restaurant, bar and observation deck inside for visitors to enjoy, perhaps with a romantic meal or cocktail.

There’s even a light sculpture on the tower shaft that functions as a clock, which is the largest digital clock in the world!

For charming historic timber-framed houses and three different castles in one town, you can’t go past Hattingen on the Ruhr River.

The town was first mentioned in 1396 and contains many preserved medieval buildings, with the Old Town still partly enclosed by the original city walls. Hattingen was part of the Hanseatic League, an important trading city and a centre of coal production in the region.

Did we miss any of your favorite places to visit in North Rhine-Westphalia?