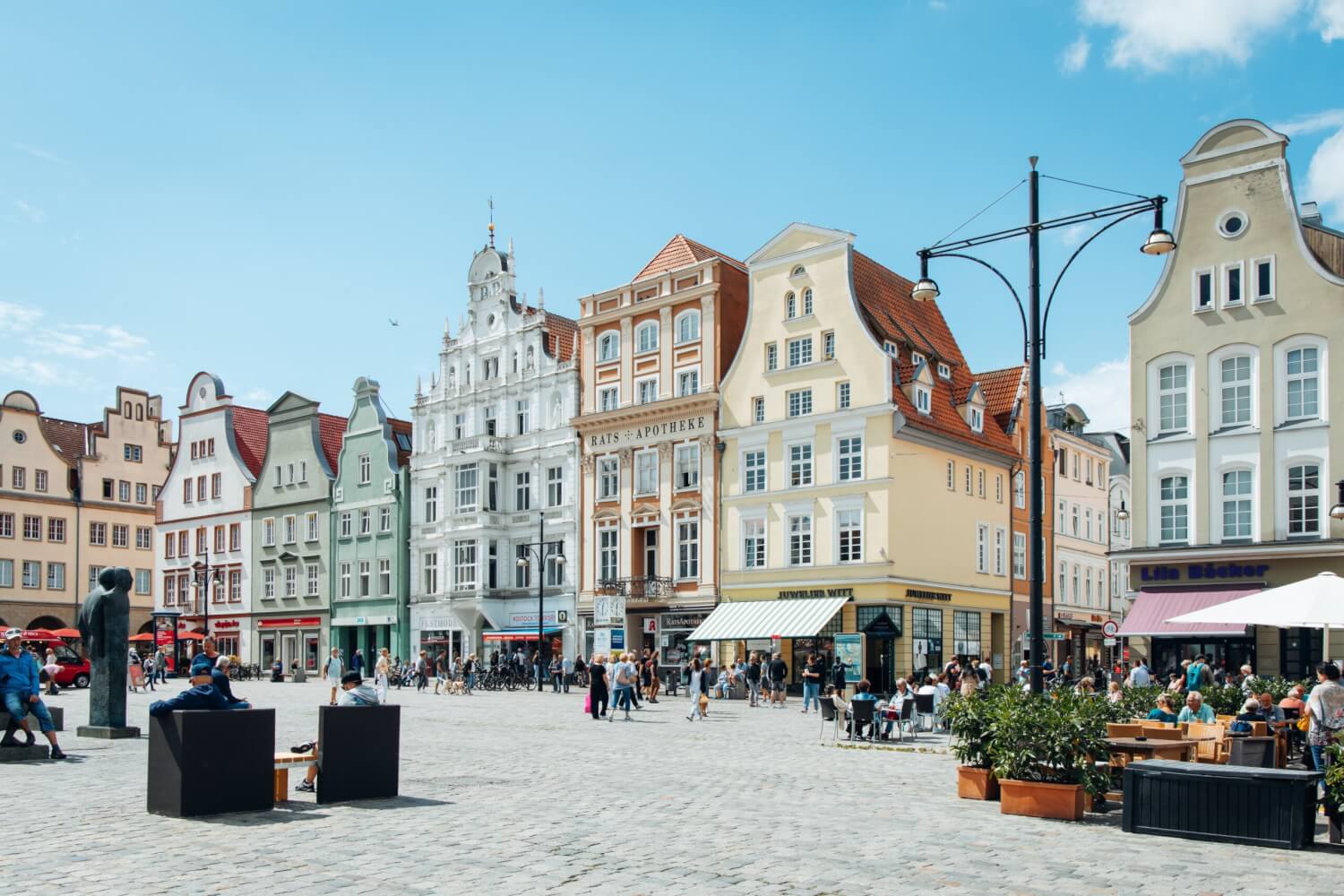 Mecklenburg-Western Pomerania (Mecklenburg-Vorpommern in German) may be a bit of a tongue-twisting mouthful to say, but it’s also a region in Germany with plenty to enjoy!

Since Mecklenburg-Western Pomerania is located on the Baltic Sea Coast, it’s most known for its beaches, although there are many other attractions to explore as well.

In this list of beautiful places to visit in Mecklenburg-Western Pomerania, we’ll be sharing some of our favorite destinations in this underrated state, including the prettiest castles and cutest towns.

We hope you enjoy our recommendations, and be sure to let us know in the comments if there are any Mecklenburg-Western Pomerania must-sees you would add to our list!

One of the best places to visit in Mecklenburg-Western Pomerania is easily the stunning Schwerin Castle, located in the city of Schwerin which is the state capital.

The castle is located on a little island within Schwerin Lake, with two bridges for access. One bridge leads to the entrance seen in the photo below, while the one on the other side of the island leads to the vast gardens complete with a small cruise canal.

Schwerin Castle was originally the home of the dukes and grand dukes of Mecklenburg and later Mecklenburg-Schwerin. Today parts of it are still used by the Mecklenburg-Vorpommern state parliament, while the rest is open for visitors to experience this gorgeous example of romantic architecture.

You can explore the opulent interiors on a guided tour or with an audio guide, while the castle gardens are magical in summer, or in winter when blanketed in snow!

PRACTICAL INFORMATION FOR VISITING: The stunning park and gardens can be explored for free while there’s a small fee (currently €6 reduced from €8.50 while parts of the museum are closed) to explore parts of the interior. The castle is open year-round Tuesday to Sunday from 10am, closing at 6pm in summer and 5pm in winter.

As the largest city in Mecklenburg-Western Pomerania, Rostock offers a coastal lifestyle that isn’t normally associated with German cities.

Rostock used to be one of the most important Hanseatic cities, so it’s filled with historic buildings including numerous stunning Brick Gothic churches and interesting museums. There are four original city gates still standing and the Cultural History Museum also contains interesting items from all over Mecklenburg.

The Warnemünde Am Strom promenade is the best spot for a wander along the harbour to enjoy views of boats while stopping off at the many boutiques and shops. Make sure you also have a meal at Zur Kogge, a really cool seafood restaurant decorated like the inside of a ship.

If you want to spend a day in the sun and sand, head to Warnemünde Beach on the Baltic Coast just a 20-minute drive from the city centre.

Rügen is an island off the northern coast of Germany, and one of the most interesting places to visit in Mecklenburg-Western Pomerania with a lot of different attractions.

While Germany isn’t usually thought of as a coastal destination, the island of Rügen contains all the soft sandy beaches, coastal resorts and historic towns you could dream of for a beachside holiday. Located in the Baltic Sea, Rügen is the largest island in Germany and is most known for its imposing chalk cliffs.

Popular attractions on the island include Jasmund National Park (more on that in a minute), the Granitz Hunting Lodge (more on that later) and a scenic train route past forests, beaches and resorts.

In summer, the Störtebeker Festival tells the story of a 14th-century pirate with 150 actors, four ships, 30 horses, and amazing special effects on the Great Jasmund Lagoon.

One of the most beautiful places in Mecklenburg-Western Pomerania is Jasmund National Park, which is also located on Rügen Island.

This national park might be the smallest in Germany, but it’s still a UNESCO World Heritage Site and contains the largest white chalk cliffs in Germany, known as the Königsstuhl (king’s chair in German). Behind the cliffs are protected ancient beech forests where visitors might spot white-tailed eagles, kingfishers, house martins and peregrine falcons.

There are many ways to explore the Jasmund National Park, with numerous hiking and cycling routes. It’s also stunning to see from the water on a boat tour of the peninsula so that you can truly appreciate the white cliffs. Or head to the observation deck of Königsstuhl for views out over the Baltic Sea.

A former Hanseatic town on Germany’s coast, Stralsund contains many brick Gothic buildings which are some of the most striking things to see in Mecklenburg-Western Pomerania.

These brick buildings and the preserved medieval centre are part of a UNESCO World Heritage Site, with colourful houses circling the main market square. The 13th-century Town Hall (pictured below) is a very unique sight with its ‘show facade’ of windows open to the sky behind.

Along with the Old Town, Stralsund is home to the German Oceanographic Museum which displays maritime and oceanographic exhibitions. The beautiful German three-mast ship Gorch Fock I is now a museum ship in the harbour which can be explored with or without a guide.

Stralsund is also the main connection for reaching Rügen Island via multiple ferry services and two bridges, but we recommend stopping to explore the city if you’re heading to the island.

When it comes to stunning natural Mecklenburg-Western Pomerania places to visit, you can’t go past the Western Pomerania Lagoon Area National Park, which is the largest national park in the state.

Located on the coast of the Baltic Sea about an hour’s drive north-west from Stralsund, the national park encompasses several peninsulas (including the Darß Peninsula, more on that later), dunes, salt marshes, islands, islets and lagoons. Most of the park contains shallow water cut off from the sea, which is home to very unique coastal fauna, especially cranes and geese.

The Western Pomerania Lagoon Area National Park is famous for being the largest roosting spot for cranes in Europe, with around 30,000 cranes arriving in autumn every year. The best way to explore the park is by bike but it’s also possible to walk or take a boat trip.

Insel Usedom (Insel is Middle High German for island) is another large island in the Baltic Sea, with around 80% of the island located in Germany while the smaller eastern section is part of Poland.

Like Rügen, Usedom is renowned for its resorts and 42 kilometres of fine white sandy beaches. The island receives a lot more sun than other parts of Germany so it’s very popular as a beach holiday destination and also contains plenty of beautiful natural landscapes to explore.

In fact, Usedom provides an excellent combination for both relaxation and vigorous exploration with thousands of kilometres of walking or cycling paths between the seaside resort towns. Historical seaside towns like Ahlbeck, Heringsdorf and Bansin are particularly charming with picturesque piers and any type of accommodation you could desire.

Ludwigslust Palace was once a hunting lodge in the town of Ludwigslust and is now one of the prettiest places to see in Mecklenburg-Western Pomerania.

The hunting lodge was built by Prince Christian Ludwig when he was the heir to the Duke of Mecklenburg-Schwerin and he had it expanded over the following decades. Apparently, he loved his palace so much that he called it Ludwigslust, which means Ludwig’s Joy.

Ludwigslust features a Baroque exterior with neoclassical interiors, surrounded by a Schlosspark of 120 hectares laid out with formal canals, fountains and a cascade. Visitors can now enjoy the park for free all year round and explore the interior museum for a small fee.

One of the most popular Mecklenburg-Western Pomerania tourist attractions is the Granitz Hunting Lodge, another fascinating place located on the island of Rügen.

The hunting lodge was built between 1838 to 1846 by the Putbus princely family and is now the most-visited spot on Rügen Island. Visitors can explore the museum castle interiors and even climb up the 38-meter-high central tower for incredible views across the island. It’s not for the faint of heart though, as the tower is ascended by a circular cast-iron staircase with 154 dizzying steps!

Inside the castle museum, there’s a permanent exhibition about the castle’s construction, as well as a collection of horns from animals around the world. The best way to visit is by riding the Schmalspurbahn train and then walking about 1km through the forest to the castle.

As we mentioned earlier, Darß is one of the peninsulas located inside the Western Pomerania Lagoon Area National Park, specifically the middle peninsula, that’s famous for its forests, scenic shoreline and the ‘artist colony’ of Ahrenshoop.

One of the most popular attractions in Darß is the Darßer Lighthouse, located on the north-western tip of the peninsula and reached by a nice hike through the Darßer forest. You can also ride a bike or horse-drawn carriage, but you can’t reach it by car! Once there, visitors can actually climb the tower of this lighthouse which was originally built in 1848 and is still in operation.

There are other walking routes through the Darßer forest, where you might spot cranes, geese and even deer. Of course, the beaches of Darß are beautiful during any season, but if you want to escape inclement weather, check out the Art Museum Ahrenshoop for art by local residents.

Müritz is the second-largest lake in Germany, so it’s not really surprising that the Müritz National Park is one of the most-visited Mecklenburg-Western Pomerania attractions.

The national park is filled with beautiful forests, lakes, swamps and meadows to explore, many of which are important breeding grounds for birds. Visitors can enjoy bike riding, hiking or canoeing while keeping an eye out for white-tailed eagles, ospreys and cranes. There are also hides if you are purely there to spot bird life.

Among the small towns within the national park, Waren is a standout, on the northern shore of Lake Müritz. With a medieval town centre, numerous spas and steamboat cruises on the lake, it’s the ideal spot to discover Müritz National Park.

Did we miss any of your favorite places to visit in Mecklenburg-Western Pomerania?