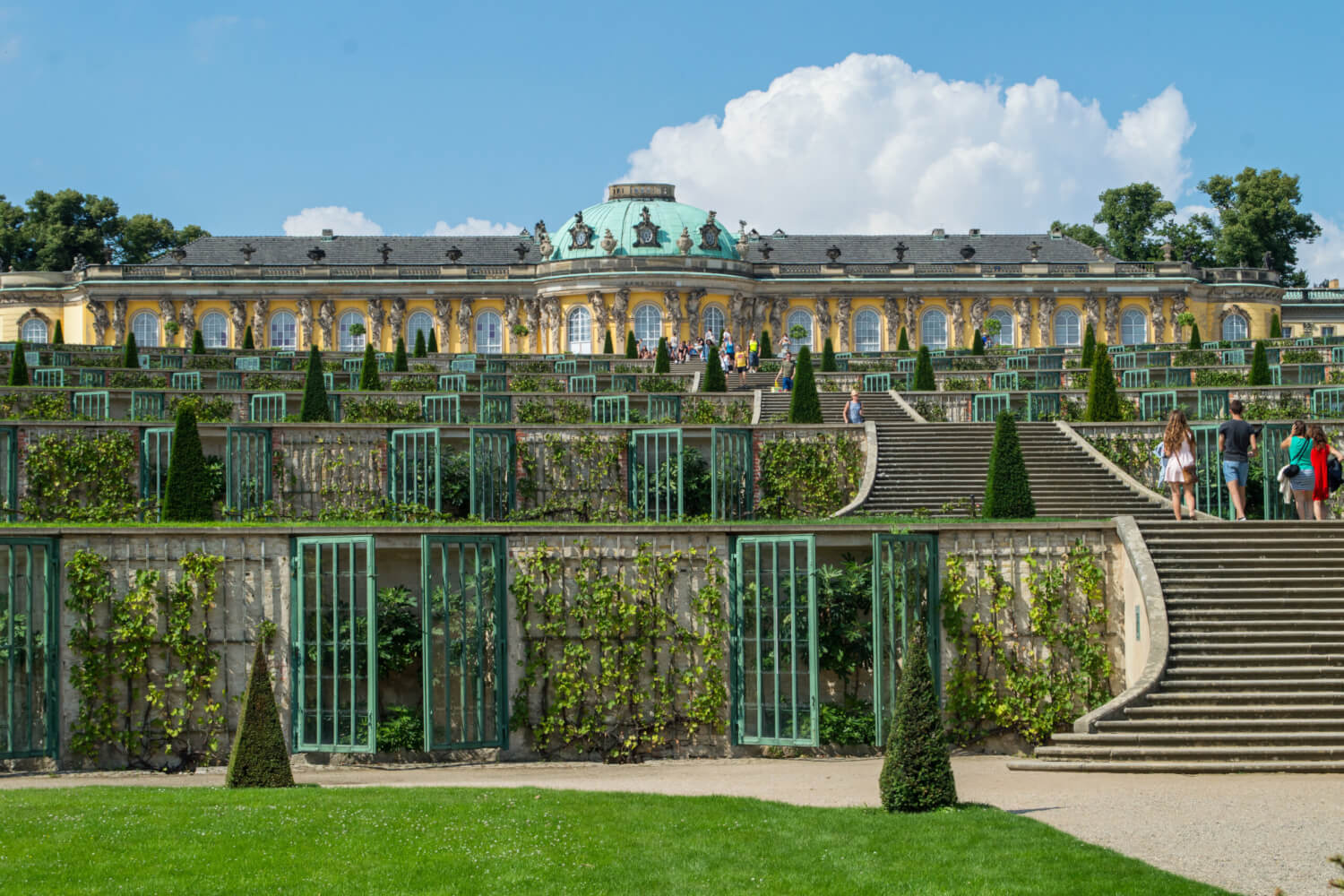 From beautiful castles and palaces to indoor tropical islands, there are many unique things to discover in the German state of Brandenburg!

Brandenburg surrounds the capital city of Berlin, as well as the cities of Potsdam and Brandenburg, meaning yes, there is indeed a city called Brandenburg within the state of Brandenburg… but there’s a lot more to the state than that!

In this list of fascinating places to visit in Brandenburg, we’ll be sharing some of our favorite destinations in this German state, including both man-made and natural attractions.

We hope you enjoy our recommendations, and be sure to let us know in the comments if there are any must-see Brandenburg places you would add to our list!

Directly next door to Berlin is Potsdam, the capital city of the state of Brandenburg and one of the most popular Brandenburg attractions.

Potsdam was originally the home of the Prussian Kings, is over 1,000 years old and home to Germany’s largest World Heritage Site; the Sanssouci Palace (more on that in the next section). There are actually a number of beautiful palaces to explore in Potsdam, as well as a Roman Baths complex and a Chinese Tea House.

The entire city is filled with beautiful historic architecture, including three remaining city gates from the original city wall, the Neoclassical dome of St. Nicholas’ Church and the Gothic revival Babelsberg Palace.

There are also two unique street quarters, one featuring Dutch architecture and the other Russian, built by the many immigrants who came to Potsdam from all over Europe. We also recommend experiencing the waterways of Potsdam via one of the Weisse Flotte steamboats!

The incredible Sanssouci Palace and Gardens is easily one of the most beautiful places in Brandenburg, often considered a German rival to Versailles in France.

Sanssouci was built as the summer palace of Prussian King Frederick the Great between 1745 and 1747. While it’s smaller than Versailles, it still features many charming follies, temples and fountains in the surrounding gardens.

The French phrase sans souci means ‘without concerns’ and that is exactly how King Frederick felt whenever he retreated from the royal court to relax here. Today, more than 2 million people come from around the world to enjoy his favourite home.

PRACTICAL INFORMATION FOR VISITING: Make sure you check the opening times for Sanssouci Palace ahead of time as they vary throughout the year. You can also save €5 by booking your tickets online instead of at the palace!

Another example of beautiful places to see in Brandenburg is Schloss Cecilienhof; which is also a palace in Potsdam, although it’s built in the style of an English Tudor manor house.

Kaiser Wilhelm II had Schloss Cecilienhof built for his oldest son, Crown Prince Wilhelm and his wife Cecilie, for who it was named. It was constructed between the years 1914 to 1917 and was the last palace built by the House of Hohenzollern – who ruled Prussia and the German Empire until the end of WWI.

Both Crown Prince Wilhelm and Cecilie were very impressed by the Tudor-style homes of England, and while Schloss Cecilienhof looks like a small manor, it actually holds 176 rooms.

Cecilienhof was also famously the location of the Potsdam Conference, where the leaders of the Soviet Union, the United Kingdom and the United States met to discuss the plan for peace after WWII.

PRACTICAL INFORMATION FOR VISITING: It’s possible to book a combined ticket to explore both Sanssouci and Cecilienhof on the same day. Make sure you also check the opening times as they change seasonally.

One of the most unique Brandenburg places to visit is the Tropical Islands Resort, which is located within a massive former airship hangar!

The Tropical Islands Resort is a fascinating attraction, holding records for being located in the largest free-standing hall in the world as well as being the largest indoor waterpark in the world. Additionally, it’s the largest tropical holiday resort in Europe and houses the largest sauna complex in Europe.

In 2004, the converted airship hangar was opened as a theme park, sauna, spa and hotel where the temperature inside is kept at a humid 26 °C (78 °F). Inside the hangar are multiple swimming pools, slides, fountains, tents, rooms, lodges, restaurants, bars, a beach and the biggest indoor rainforest in the world.

There are different themed areas for visitors to explore as well as different admission options, whether you want to spend a day or stay a few nights with the entire family. If you’re looking for a truly unique place to visit in Brandenburg, be sure to put this one on your list!

Another example of more unusual things to see in Brandenburg is the Beelitz Treetop Walkway, where visitors can stroll 23 metres high amongst the trees that have gradually taken over the grounds of what used to be a sanatorium.

The Beelitz Sanatorium was once a site for people from Berlin with tuberculosis to come and recover in the fresh air. It was then used as a military hospital in WWII, before being left to decay. While the buildings have been left to crumble, in 2015 a treetop walk was opened for visitors to enjoy seeing the ruins and surrounding trees from up on high.

It’s an eerie place, but popular with locals and tourists alike who come to relax or get some exercise. There’s also a 36-metre-high observation tower where you can see all the way to Berlin on a clear day.

PRACTICAL INFORMATION FOR VISITING: The main park is open every day for different hours depending on the seasons, except winter when it’s closed. Entry costs €13.50 for adults and it’s also possible to join a guided tour of the hospital grounds for an additional cost.

The state of Brandenburg is filled with forests, and Spreewald Forest is our pick as one of the best places to visit in Brandenburg if you want to get close to nature.

Translated to the ‘Spree Forest’ in English, Spreewald is located on an inland delta of the River Spree, about 100 km southeast of Berlin. It’s a UNESCO-designated Biosphere Reserve due to the traditional irrigation system which features more than 200 canals, usually traversed by the traditional flat-bottomed boats known as Spreewaldkähne.

Within this area are a number of small villages with canals instead of streets, in particular Lehde, which is also home to an open-air museum where visitors can learn about 19th-century life in the Spreewald. There’s also a Pickle Museum (Gurkenmuseum) in Lehde since the region is well-known for producing cucumbers!

If you can time your visit for the annual pickle festival (in summer) you’ll get to see locals showcasing their best pickle recipes in hopes of being crowned Pickle Queen for the year but the region is very magical no matter when you visit.

About an hour’s drive from Berlin is the first brick Gothic building to be built in Brandenburg – the Chorin Monastery.

Founded in 1258, this former Cisterian abbey fell into decay during the 19th-century but was restored by the Prussian architect Karl Friedrich Schinkel. Since its restoration, Chorin Monastery has become a popular destination for artists, partly since it looks similar to the cathedrals of Paris but also since it’s surrounded by stunning forests and the Amtsee lake.

Today the monastery hosts many interesting events, including a Summer Music Festival, New Year’s concerts, an Easter festival and a herbs and ceramic festival. Visitors can join a guided tour to learn about the monastery’s history or view art on display in the abbot’s house.

Sachsenhausen-Oranienburg was a Nazi concentration camp between the years 1936 until the defeat of Nazi Germany in May 1945.

Generally used to hold political prisoners (such as Joseph Stalin’s oldest son) today Sachsenhausen is a memorial and museum open to the public so they can learn more about Germany’s dark past. Sachsenhausen was mainly a labour camp, but also contained a gas chamber and a medical experimentation area.

While it can be harrowing to be confronted by the horrors of the past that occurred at Sachsenhausen, visiting places like this is still important to remember the victims of Nazism and ensure it’s never allowed to happen again. The memorial is free to visit, and Christmas Day is the only time the visitor’s center and museums are closed.

Schloss Rheinsberg is another gorgeous German palace, which both predates and served as the inspiration for Sanssouci Palace.

There was originally a moated castle on the site, which was updated to a Renaissance-style water castle in 1566. It changed hands a number of times before being bought by the Prussian King, Frederick William I. He gave the castle to his son, who later became King Frederick the Great (and built Sanssouci) who lived there with his wife until he ascended the throne in 1740.

While Frederick the Great had Sanssouci built as his ultimate pleasure palace, he apparently called his years at Rheinsberg the “happiest of his life”. Today the castle and its impressive gardens are open to the public, although do be aware that most of the staff don’t speak English… so come ready to practice your German!

While Sanssouci might now be more famous, Schloss Rheinsberg remains one of the best Brandenburg tourist attractions for visitors who love castles and is well worth a trip!

Cottbus is the second-largest city in Brandenburg and contains many interesting attractions that make it worth exploring.

Located about 125 km southeast of Berlin, on the banks of the River Spree, Cottbus is a university city most famous for the stunning Branitzer Park and Branitz Castle. Schloss Branitz is a pretty Baroque-style castle, surrounded by the English-style landscape park designed by Prince Hermann von Pückler-Muskau in 1845.

Two earth pyramids are the most iconic parts of the park, one of which is located in the middle of an artificial lake and also serves as the prince’s mausoleum. The Cottbus Zoo also adjoins the park, separated by a road.

The medieval city centre of Cottbus shouldn’t be missed, with charming buildings watched over the by Spremberger Turm (pictured below); a 13th-century tower in Cottbus’s southern medieval gate.

For those keen on a leg workout, visitors can also climb the tower for epic views over the surrounding countryside.

Not to be confused with the more well-known Frankfurt am Main in the state of Hesse, Frankfurt an der Oder is a city in Brandenburg located on the west side of the Oder River, which forms the border between Germany and Poland.

Sometimes just called Frankfurt (Oder), this city is most notable for the red-brick Gothic buildings such as the Rathaus (town hall, pictured below) and Marienkirche (St. Mary’s Church) which famously displays stained-glass windows depicting the life of the Antichrist, among other biblical images.

As well as these historic examples of Gothic architecture, Frankfurt (Oder) is also home to a very cool and unique fountain, known as the “Comic Fountain“. Standing in this fountain is a colourful giant, with two clocks for eyes.

Did we miss any of your favorite places to visit in Brandenburg?