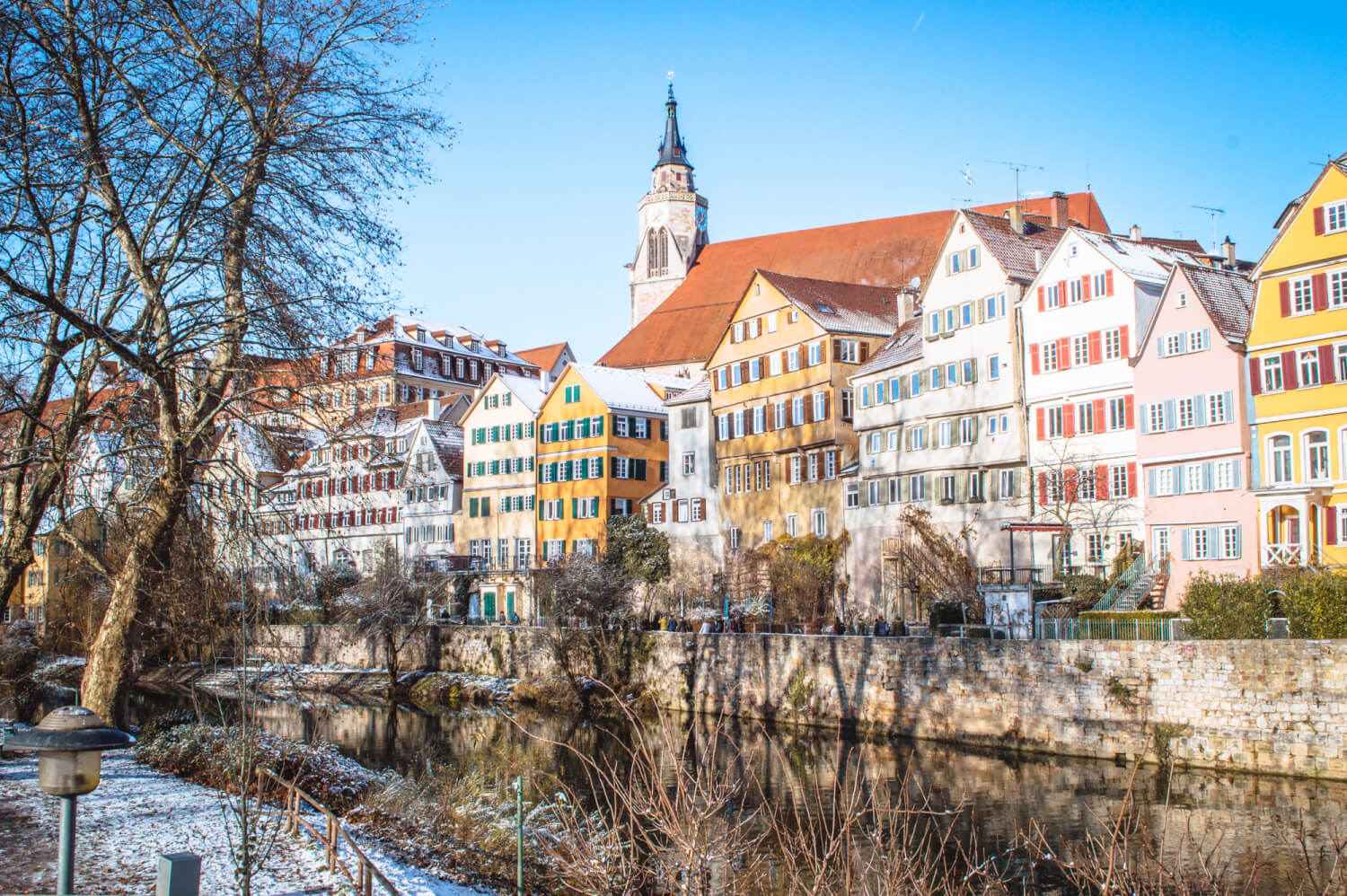 From the natural splendor of the Black Forest to charming medieval towns, the German state of Baden-Württemberg has plenty to offer visitors.

Baden-Württemberg is located in the southwest of Germany, bordering both France and Switzerland. It’s an area known for outdoor activities in spectacular scenery, but that’s not all there is to discover here!

In this list of beautiful places to visit in Baden-Württemberg, we’ll be sharing some of our favorite destinations in this spectacular German state, including the prettiest castles and some more unusual attractions.

We hope you enjoy our recommendations, and be sure to let us know in the comments if there are any additions you would add to our list!

One of the best places to visit in Baden-Württemberg is the popular and charming city of Heidelberg.

Heidelberg is located on the banks of the River Neckar, with the impressive Old Bridge standing one of the most recognisable symbols of the city (apart from the castle, of course!).

While Heidelberg Castle is mostly in ruins, the renaissance and gothic remains dominate the city skyline and can be visited via a funicular railway. And as a treat for those lucky enough to visit in the summer, the Heidelberg Castle Festival is held in the main courtyard with music and theatre performances from mid-June to early August.

Beyond its main landmarks, the Old Town of Heidelberg is filled with beautiful baroque architecture, along with beautiful examples of medieval and gothic styles. Architecture lovers will love admiring the city’s many stunning churches as well as Heidelberg University, one of the oldest universities in Europe.

On the northern banks of the River Neckar, you’ll also find the Philosopher’s Walk, named for the many professors and philosophers who would walk along here while discussing their work. Today, it’s a great walk for visitors to enjoy the views of the old town and castle.

Easily one of the most beautiful places in Baden-Württemberg is Lake Constance; which is located right down the bottom of the state, bordering Austria and Switzerland.

Lake Constance covers an area of 63 km long and 14 km wide, so there are plenty of places for visitors to base themselves in order to enjoy the waters. Activities on offer include water sports, sailing, hiking and biking. It’s even possible to go for a zeppelin ride to see the lake from the sky!

Like Heidelberg, the university city of Tübingen is one of the prettiest medieval cities to explore within Baden-Württemberg.

The historical city centre is filled with charmingly crooked half-timbered houses while the Neckar River briefly parts into two streams with an island in the middle. The Neckarinsel (Neckar Island) is a popular location for concerts, plays, and literary readings.

Tübingen is known for having the lowest median age in Germany since so many residents (about one in three) are university students. As you might expect, the city has plenty to offer in terms of nightlife, with regular university events as well as nightclubs, bars, theatres and festivals.

But even if you’re not interested in partying, wandering around and getting lost among the cobblestone lanes, canals and alleys is just delightful!

Most famous for its Baroque palace, Ludwigsburg is a city just north of Stuttgart which is unusually located back from the Neckar River, with vineyards instead lining the riverbanks.

The incredible Ludwigsburg Residential Palace draws many visitors to the city, to explore the largest palatial estate in Germany. Sometimes called “the Versailles of Swabia” (Swabia was the name of the duchy before it was divided between Baden-Württemberg and Bavaria), Ludwigsburg Palace is made up of 18 opulent buildings surrounded by the Blühendes Barock (Blooming Baroque) gardens.

The Ludwigsburg Pumpkin Festival is one of the most unusual Baden-Württemberg attractions, taking place each autumn in the grounds of the Blühendes Barock gardens. Between August-December visitors can enjoy all sorts of foods, artwork and events centred around the humble pumpkin!

PRACTICAL INFORMATION FOR VISITING: You can only see the interior of Ludwigsburg Palace on a guided tour, although they do take place at least once a day (for English tours) during summer. Make sure you check the website for opening times and prices.

The city of Stuttgart is the capital of Baden-Württemberg, as well as the largest city in the state and the sixth-largest in Germany overall.

Interestingly, Stuttgart is both known as a ‘green city’ as well as a manufacturing hub for cars. Both Mercedes-Benz and Porsche have their headquarters here, as well as a museum for fans of either (or both) brands. There are many parks to explore in Stuttgart, along with Wilhelma – one of the largest zoos and botanical gardens in Europe.

Stuttgart’s Old Castle is now a museum about the history of the Württemberg part of Baden-Württemberg and is very interesting if you want to know more about the state. There’s also a New Palace in Stuttgart (pictured below), located on the main square and which was once the home of the Kings of Württemberg.

Nowadays the New Palace is mostly used as the seat of different government sections, so it’s only occasionally open for tours. The exterior, and rest of Stuttgart, is still worth exploring though!

Located on the border of France, the Black Forest (called Schwarzwald in German) is a mountain range covered in evergreen forests. There are many traditional villages scattered through the region, which is also known for delicacies like Black Forest Cake and Black Forest Ham. There are seventeen Michelin-starred restaurants in the area as well, so it’s a great spot for trying delicious food!

Luckily there are also plenty of physical activities to be enjoyed within the Black Forest, so you won’t need to feel guilty if you’ve been doing a lot of fine dining. The forest is filled with hiking trails along with mountain biking and cross-country skiing trails. There are also lakes for recreational water activities.

The spa town of Baden-Baden is a very popular destination within the forest, although there are quite a few towns with thermal baths to discover.

One of the most impressive things to see in Baden-Württemberg is the fairytale-esque castle of Hohenzollern.

Located about halfway between Stuttgart and Lake Constance, Burg Hohenzollern is a dramatic hilltop castle built on top of Mount Hohenzollern. It was the ancestral seat of the imperial House of Hohenzollern, a German royal dynasty which was overthrown during the German Revolution, including Kaiser Wilhelm II, the last German Emperor and King of Prussia.

The castle as it stands today was constructed between 1846 and 1867 by King Frederick William IV of Prussia in a style that combines Gothic Revival with the châteaux of the Loire Valley – which is why it looks so magical! While it is still privately owned by the House of Hohenzollern, it’s now one of the most visited castles in Germany.

PRACTICAL INFORMATION FOR VISITING: Both the castle and grounds can be explored without a guide for €22 for adults. Make sure you check the opening times as they do change seasonally. There’s a shuttle bus included in the ticket price to get from the parking lot to the castle entrance, as it’s quite a steep walk!

Burg Lichtenstein is another castle that’s one of the most popular Baden-Württemberg tourist attractions.

Lichtenstein Castle is quite unique in that the modern version which stands today was built to look like the castle from the novel Lichtenstein by the German writer Wilhelm Hauff. The novel was written as a homage to the work of Sir Walter Scott (who was very popular in Germany in the early 19th-century) and features themes of romance and patriotism.

Count (later Duke) Wilhelm von Urach was so inspired by the novel that he bought a crumbling ruin and had an emulation of a medieval castle built to live in that looked like the castle which features in the novel. While the castle was damaged during WWII it has since been restored and still houses much of the first Duke von Urach’s impressive collection of medieval art.

PRACTICAL INFORMATION FOR VISITING: You do need to join a guided tour if you want to see the interior of the castle, which costs €12. The castle is open daily between March and December, although opening hours differ slightly so make sure you check the website ahead of your visit.

The city of Ulm is one of the best places to see in Baden-Württemberg, especially if you enjoy seeing impressive architecture from many different time periods.

Ulm is located on the banks of the River Danube and is most famous for being the birthplace of Albert Einstein as well as containing the church with the tallest steeple in the world (Ulm Minster, pictured below). Ulm Minster’s steeple is 161.5 metres (530 feet) high and was built in the Gothic Revival style from a mix of brick and sandstone.

Along with the tallest church, Ulm is home to many of the beautiful half-timbered houses found throughout Germany, along with examples of medieval and renaissance style architecture. If you’re more interested in modern architecture then don’t miss the Ulm public library, which is housed in a massive glass pyramid nestled amongst the older-style buildings!

If you’re visiting Baden-Württemberg with children, or you just enjoy theme parks, then Europapark is definitely one place not to miss!

Europapark is the largest theme park in Germany as well as the second-most-popular in the whole of Europe (after Disneyland Paris) and home to no less than 13 different roller coasters. It’s made up of multiple different sections, most of which are themed around different European countries so that visitors can experience Italy, Ireland, Iceland and even Greece through different rides.

There’s also a section based on the fairy tales by the Brothers Grimm, a water park called Rulantica, a Virtual Reality Experience Centre and six different hotels for staying over. It’s very close to the French border, about an hour from Strasbourg in France, half an hour from Freiburg (more on that below) and a bit over two hours from Stuttgart.

If you’re still looking for vibrant and pretty Baden-Württemberg places to visit, you can’t go past the university city of Freiburg im Breisgau.

Located on the edge of the Black Forest, close to the French and Swiss borders, Freiburg is notable for enjoying one of the sunniest and warmest climates in Germany, so it’s the perfect destination when you need some sun! It’s also close to Europapark if you are looking to combine a trip to the theme park and/or exploring the Black Forest.

But you don’t need to leave Freiburg to see beautiful sights, as it’s a very picturesque city nestled on the banks of the River Dreisam with a charming Old Town. The main sites to check out include Freiburg Minster, one of the oldest and most beautiful cathedrals in Europe, with some impressive gargoyles on the exterior!

There are also a few remaining old city gates, as well as pretty canals crisscrossing the city and Seepark Betzenhausen; a man-made lake complete with a beer garden to enjoy on those warm days.

Did we miss any of your favorite places to visit in Baden-Württemberg?